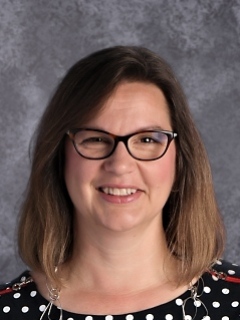 Home / About / Our Vision & History / The Principle Approach

The Principle Approach® to education focuses on consistent and ordered teaching and learning. The goal is to build a student’s Christian character and sense of self-government, Christian scholarship, and Biblical reasoning for lifelong learning and discipleship.

As Christians, the Principle Approach helps us mature in the knowledge of God (His purposes and ways), preparing us to advance the Kingdom of Christ to the uttermost parts of the earth. As American Christians, the Principle Approach enables us to discern the biblical principles of government upon which our nation was founded, thereby, empowering us to restore what has been systematically dismantled over generations.

The heart of the Principle Approach teaches students to reason from biblical truth, or principles, and to make application to every area of life. Every class at Dayspring Christian Academy begins with God’s Word. From the Divine language of mathematics to the hand of Providence in history, each subject is taught from the perspective of God as Author. Students learn biblical principles that lead to the discovery of the origin and purpose of every subject and how God has used men and nations to advance His Kingdom. The purpose of education, under this philosophy, is to enlighten the understanding, shape the character, form the habits of discipline, and prepare young men and women to fulfill their God-given potential.

Students are taught to think and reason from biblical principles and apply them to every area of life. Students are taught how to think, not what to think. In the setting of the Christian school, these principles are initially taught within the context of the various school subjects, offering a clear picture of the character and nature of the God who authored them. Students engage in the 4Rs of learning—Research, Reason, Relate, and Record—as a methodology that builds a biblical worldview. The notebook is developed as a record of a living curriculum, taught and modeled by the teacher, as well as researched and reasoned by the student. The notebook becomes a resource for future learning, while providing evidence of lasting scholarship.

The Principle Approach employs a classical curriculum that includes logic, rhetoric, hermeneutics, Latin and Greek, classical literature, and the providential view of history. A Principle Approach education embraces the liberal arts as a means of forming the whole person through studies in the sciences and humanities, the fine and performing arts, and athletics. Beyond the regular school curriculum, the Principle Approach specifically examines and instructs students in the biblical principles of government, teaching them to think governmentally, from cause to effect, from internal to external. Students recognize that the degree of liberty individuals enjoy in our nation is directly connected to the degree in which the biblical principles of God’s Word are embraced and followed.

The Principle Approach is the kind of education that prevailed during America’s first two hundred years. This method produced men and women who were able to reason from biblical principles of government to form the world’s first Christian constitutional federal republic—The United States of America. This great experiment was built upon the Christian ideas of God, man, and government, and it afforded the greatest degree of liberty for the individual experienced up to that time.

The Biblical Principles Upon Which America Was Founded

God’s Principle of Individuality: There is one God who is sovereign over all Creation. Everything in God’s universe is an expression of His character, His nature, His infinity, and His individuality.

The Principle of Christian Self-Government: Allowing Christ to rule in one’s heart internally. The amount of liberty one enjoys is directly related to the degree to which that individual governs himself according to God’s Word.

The Seed Principle: Moving from cause to effect, the seed of local Christian self-government is planted internally in the heart of the individual and then moves outwardly to affect the family, the church, and the civil spheres.

The Principle of Christian Character: A self-governing republic requires a virtuous people in order to endure.

The Christian Idea of Civil Government: Civil government takes into account man’s sinful nature and exists to secure the God-given rights of the individual. Civil government is based upon God’s law, not the will of the people.

The Christian Principle of Property: That for which one labors, becomes his property. The individual has a property in his thoughts and beliefs, as well as in his physical possessions. “Conscience is our most sacred property.”1

The Principle of Unity: Unity with diversity is a reflection of the nature of God, revealed in the Trinity and creatively expressed in the universe. Internal unity produces external union. These and other biblical principles are vital for maintaining the integrity of our republic. If we forget or abandon these principles, we will become, as colonial governor John Winthrop said, “a byword among the nations.”2 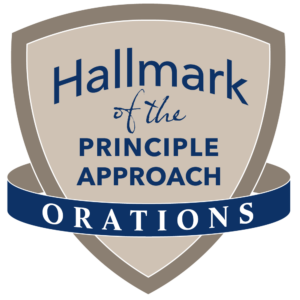 One of the distinctive attributes of a Principle Approach education at Dayspring Christian Academy is the annual writing and presenting of the oration. The oration is a two-step process, the writing phase and the public speaking phase. It is challenging, but rewarding. Our Headmaster’s Oration Competition Finalists are selected to present their orations at events including the Patriots Celebration Dinner and the Remember America Speaker Series. At Dayspring, we think it is important to ask questions. Students are taught to seek original and primary sources, ask the question “why?” and relentlessly pursue truth. It is important for Dayspring students to learn to articulate their beliefs and convey them in writing and in speaking. The oration process is a hallmark of the Principle Approach. Each spring, students write a persuasive oration on a topic of their choosing and must present it in the fall during the Headmaster’s Oration Competition. Topics are passionately held beliefs of our students who learn to effectively communicate through written and spoken word. 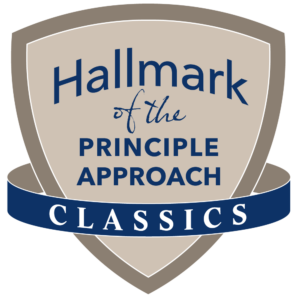 The Principle Approach springs out of the early American model of classical Christian education, whereas the more common classical education is based in the medieval European system. There are broad similarities between the two approaches, but there are substantial differences in the methods. While the American colonial and founding generations knew and drew from the classics, they drew much more directly from the Bible as it relates to various aspects of civil life, including government, personal property, and Christian character development. You can learn more about this in our blog, What is a Principle Approach School?

At Dayspring, students learn through the classical discipline of logic, which exercises students in the mechanics of truth and enables them to work through ideas and develop mature views.

In rhetoric, students learn to communicate persuasively to better defend their faith and position themselves as leaders wherever God may call them.

Hermeneutics provides an explanation and interpretation of the original texts of Scripture.

As a Principle Approach school, Dayspring teaches students to use primary and original sources. So, the classical languages of Latin and New Testament Greek are taught. As students learn New Testament Greek, they are able to go into the original Greek text and read Scripture as it was written, while Latin forms the basis for understanding many English words. It provides good structure for categorizing English words and understanding meanings, suffixes, prefixes. Latin supports the English language. 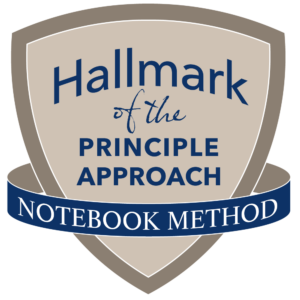 The Notebook Method is the method of scholars. It is counterintuitive to today’s culture of quick returns, instant information, and learning at the surface. It takes discipline and work ethic.

The Notebook Method is a product of the student’s creativity and a permanent record of his productivity. It assists parents and teachers in overseeing progress and visually demonstrates the character development, diligence, and responsibility of the student.

Traditional schools employ methods that often involve regurgitation of learning with the end goal of test mastery. After the test is over, there may be little record of learning. The Notebook Method is in keeping with the Principle Approach’s philosophy of “consistent and ordered teaching and productivity.” When a child is finished with a subject, he has a complete record of what he has learned, and has a visual representation of his accomplishments. To learn more about the Notebook Method, read about the Notebook Method on our blog!

A Providential View of History 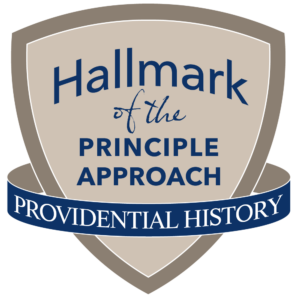 Our study of history becomes truly Christian when students learn to recognize the hand of God as the cause of events. From this perspective, students understand that God has a plan for each nation…and each person. Students learn to see that because God used ordinary people in the past, He is doing the same now. Students learn to ask, if that was God’s plan for these people, then what is His plan for me?

Learn more about Providential history in this blog.