Dayspring Christian Academy's Remember America outreaches are designed to remind Americans of their unique heritage of liberty that was founded upon biblical principles.

Learn About Our Speaker Series!    Become a Remember America Sponsor!

Remember America® is designed to protect, preserve, and proclaim America’s Christian history to help restore our nation to the biblical principles upon which it was founded. Remember America is part of Dayspring Christian Academy’s broader vision and mission to restore the biblical foundation of America. The school endeavors to do so by raising up students with a biblical worldview and starting each subject with God’s Word. We teach a providential view of history, so students learn to see how God used people and nations to accomplish His plans and purposes. In doing so, students learn to see that God had a plan and purpose for America—just as He does for all nations. 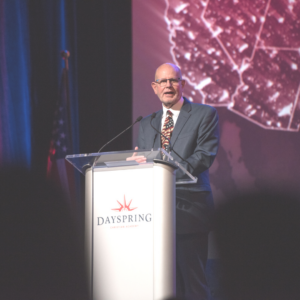 “Remember America is based upon the conviction that the freedom and liberty our nation enjoys came from God through His son, Jesus Christ, and is the result or effect of Christianity’s development and westward march from Asia, through Europe and England to America,” said Dayspring Christian Academy Founder Dr. Michael Myers. “Remember America acknowledges that the United States of America was the fullest expression of biblical principles in the civil realm that the world had ever known. Our mission is to restore that biblical foundation.”

To understand the history of America, at Dayspring students study America’s founding from original and primary sources–from the journal written by Pilgrim Governor William Bradford through America’s founding documents. In doing so, the biblical principles that undergird our constitutional republic are uncovered. These principles are the pillars of liberty in our nation and were a result of a prevailing biblical worldview during our founding era. But as America began to turn further away from its founding principles, liberty waned. It is true that the more Americans relinquish faith in the absolute power of God, belief in an all-powerful State rises.

However, those same biblical principles that were at work during our founding era are alive today and able to renovate the age. To extend our method of education beyond the classrooms, God inspired the Remember America idea.

In the early 1990s, Dayspring’s Founder Dr. Michael Myers began a radio segment on WDAC titled “It’s Time to Remember, America!” Using original documents and primary sources, Dr. Myers sought to canvass and rehearse the voices of our American ancestors and apply their perspectives to present day. This radio show was later compiled into the book by the same title, It’s Time to Remember, America! bearing in its title a charge for us today.

From this seed, God launched the entire Remember America initiative that engages the community throughout the year in outreach events that educate and inspire audiences to restore our nation. Over the past 11 years, our events have reached more than 20,000 guests.

The Remember America Speaker Series is designed to remind Americans of their unique heritage of liberty that was founded upon biblical principles. The Series is intended to bring high-caliber speakers to our community who can cogently articulate their message, which is based on their own research of original sources and personal experiences.

Remember America Lecture Series examines trends in American culture and applies the Word of God to these questions to equip citizens to navigate these turbulent times. The Lecture Series draws from the expertise of Dayspring educators to teach foundational elements of America’s beginning, including founding documents and principles, principled education, our Founders, and more.

The goal of the Remember America Restore Initiative is to help Christians understand their duties in local and county government and to become hand-on in the restoration of America in the local political arena.

Remember America Films seeks to glorify God and to inspire people to set their hope in Him by illuminating His providence in America’s history. Dayspring partnered with LampHouse Films, Lancaster, to produce the first movie in the initiative. The film, Carry Me Home, depicts the life and faith of Harriet Tubman, who helped to set more than 300 slaves free through the Underground Railroad in the 1800s.

This one-night, annual reenactment tells the Pilgrim story from their beginnings in Scrooby, England, through their escape to Holland, and their heroic voyage to the New World. Thanksgiving Exposed enables guests to witness how the seeds of Christian self-government were planted and later gave rise to the greatest republic the world has ever the known-the United States of America. 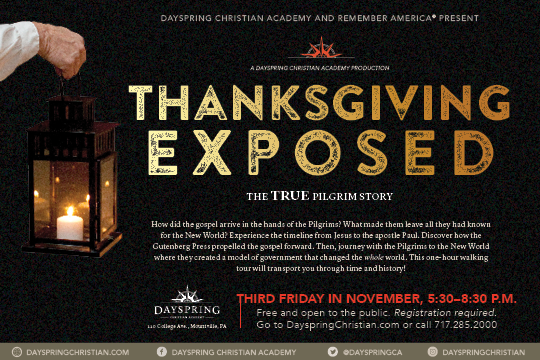