A Monumental Reminder of Our Nation’s Founding 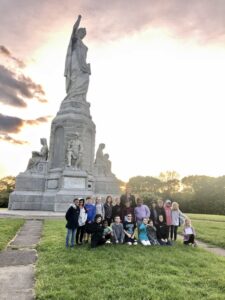 Dayspring’s third-grade class, led by teacher Jill Martin, studies at the feet of the towering National Monument to the Forefathers during their nearly weeklong study of the Pilgrims in Plymouth.

The National Monument to the Forefathers is little-known statue that is set on a hilltop in Plymouth, Mass. At 81 feet tall, it is believed to be the largest freestanding granite monument in the world. The statue is a history lesson cast in symbols, a road map of sorts that can point us back to the foundational ideals of America.

The statue was carved as a tribute to the faith of the Pilgrims who came to America aboard the Mayflower. Completed in 1888 and dedicated in 1889, the monument was crafted so we could forever trace back the roots of our nation’s founding. It faces Plymouth Harbor and gazes toward Plymouth, England, from which these Pilgrims originally fled.

The statue atop is a towering 36-foot sculpture called Faith. She points heavenward with her right hand and holds an open Bible in her left hand while one foot is set upon a replica of Plymouth Rock. She is designed to remind us of the Pilgrims’ faith and calls us to trust in God and His unfailing Word. The star in the center of her forehead symbolizes wisdom needed to live in this world.

Encircling the lower third of the statue are four smaller, seated figures that represent the Christian values and principles embraced and put forth by the Pilgrims. They are Morality, Law, Education, and Liberty.

Morality holds the Ten Commandments in her left hand and the scroll of Revelation – the last book of the Bible – in her right. She is flanked by an Old Testament Prophet on one side and an Evangelist on the other.

Law, too, holds the Ten Commandments in his left hand, while his right hand is extended in mercy. Beneath the statue of Law are two statuettes representing Justice and Mercy. Justice has scales in her right hand, representing equal justice under the law for all. There is a sword by her left side, which represents that authority is given by God to the civil government to provide justice. Mercy is a man standing with both arms at his side with his hands palms open and lifted up, depicting balance and that any punishment will be fair. Law’s pedestal is a replica of the peace treaty between the Pilgrims and the Wampanoag Indians, which lasted more than 50 years.

Education is represented by a woman wearing a victor’s wreath, showing she had accomplished the task of educating her children and was victorious in passing on the ideals of liberty to the next generation. She has an open Bible on her lap with a finger on the page as if giving instructions. The other statuette is an older man depicting a wise counsel of elders. At his feet are three objects: an open Bible, representing a lamp unto our feet and a guide to us; the Ten Commandments, God’s guidance for personal behavior and the basis for civil government; and a globe, symbolic of the Great Commission, Jesus’ command to share the Gospel with the world. Education’s pedestal has an engraved replica of the Mayflower Compact.

The final statue, Liberty, is represented by a man in wearing the full armor of God. The helmet bears a rising, which denotes a new day of liberty dawning. There is a slain lion with a paw on Liberty’s right shoulder. Chains on his hand lie broken, dangling down to his left thigh and calf, and the chain is under his foot, showing that the shackles of tyranny are destroyed and tyranny is under submission.

For more information on the National Monument to the Forefathers, Dayspring Christian Academy recommends the film Monumental: In Search of America’s National Treasure, available on Amazon.