This month marks 526 years since Columbus discovered the Americas. So momentous was his serendipity, that some scholars mark the end of the Middle Ages at A.D. 1492. With the coming of Columbus to the West, the Modern Era essentially began. Truly, the world has changed dramatically over the past half-millennium, some for the good, some for the bad, depending on one’s perspective.

One thing is for sure, God is in charge and His Story continues to unfold through the centuries. This is called the providential view of history. The idea of the providence of God is grounded in the assertion of God’s “omnisovereignty.” Central to the Judeo-Christian view of life, God is seen as the ultimate and rightful ruler of all that exists.

This understanding of God’s providence greatly informed the birth of the United States of America and was the basis for many of its founding documents. Webster’s Biblically-based definition indicates that God not only created the world and all its inhabitants, including us but also that He continues to care for His creation and is intimately involved in exercising governance over it.

Scripture is replete with the view that God is directing the course of human history as He fulfills His own purposes.

For God had allowed us to know the secret of his plan, and it is this: he purposes in his sovereign will that all human history shall be consummated in Christ, that everything that exists in Heaven or earth shall find its perfection and fulfillment in him. Ephesians 1:9-10 (Phillips NT)

Daniel answered, “Blessed be the name of God forever and ever! For wisdom and might are His! He changes the times and the seasons; He removes kings and sets up kings. He gives wisdom to the wise and knowledge to those who have understanding!” Daniel 2:20-21(NKJV)

He made from one man every nation of mankind to live on all the face of the earth, having determined their appointed times and the boundaries of their habitation. Acts 17:26 (NASB)

So, what has all of this to do with Columbus? Twenty-five years ago, my wife and I attended a conference sponsored by the Foundation for American Christian Education in commemoration of the quincentenary of Columbus’ first voyage to the New World. (That’s a fancy way of saying it was the 500th anniversary.) In the years since that auspicious landmark, the reputation and mission of Columbus has suffered much damage, thanks to the heightened sensitivities accompanying a contemporary, politically correct perspective.

Columbus, like all of us, was not perfect; he, like all of us, made plenty of mistakes and missteps along his life course. But, what of his motives? Where should we find the answer to such a deeply personal question? Should we consult modern historians and pundits, experts who may have ulterior motives? Would they be able to reveal the underlying vision and intention that Columbus, the man, held in his heart that compelled him to sail westward?

I would submit that the best repository of such information would be from Columbus, himself. “But,” you may exclaim, “that was more than 500 years ago! How could we possibly know what Columbus was thinking back then?” Remarkably, as Providence would have it, the personal journal of Columbus, which he titled Book of Prophesies has been preserved intact.

To our delight, at that quincentenary conference we attended in 1992, Kay Brigham, first to translate Columbus’ personal journal into English, highlighted her discoveries as she translated the inner thoughts and passions of Columbus, the man. As is foundational in Principle Approach education, original source material trumps modern theories and indictments.

In Columbus’ own words from his journal, Book of Prophesies: 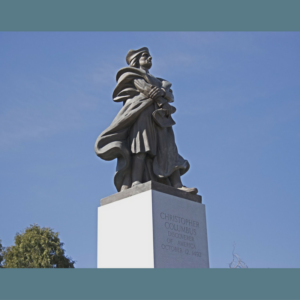 By reading Columbus’s journal, we find that he brought with him to the New World Christian character, a Providential view of God, a love of God, and a love for humanity.

“At this time I have seen and put in study to look into all the Scriptures, cosmography, histories, chronicles and philosophy and other arts, which our Lord opened to my understanding (I could sense his hand upon me), so that it became clear to me that it was feasible to navigate from here to the Indies; and he unlocked within me the determination to execute the idea….All those who heard about my enterprise rejected it with laughter, scoffing at me.”

“I have already said that for the execution of the enterprise of the Indies, neither reason nor mathematics, nor world maps were profitable to me; rather the prophecy of Isaiah was completely fulfilled.”

“The working out of all things were entrusted by our Lord to each person, [but it happens] in conformity with his sovereign will…He gave me the spirit of intelligence for the task….Who doubts that this illumination was from the Holy Spirit? He [the Spirit], with marvelous rays of light, consoled me through the holy and sacred Scriptures, a strong and clear testimony… encouraging me to proceed, and, continually, without ceasing for a moment, they inflame me with a sense of urgency.”

So, based on his own words, what can we conclude about Christopher Columbus and what did he take with him to the New World?

Many today would counter that any good borne by the Columbian voyages is far outweighed by the physical disease and cultural destruction that was wrought on the native population. While there is evidence of ungodly intent and behavior by some of those who accompanied Columbus and others to the New World, it is clear that Admiral Columbus strove to treat the native inhabitants that he encountered with Christian regard. As a devout Christian and student of the Bible, he was on a mission that transcended the material gain for which he, and his benefactors, also hoped.

Columbus’s given name, Christopher (Cristobol, in Italian), means Christ-bearer. That is how he saw himself and that is his greatest legacy. For Columbus, in the providence of God, brought Christianity to the West.