On October 2, 2019, The Daily Wire released an article titled, “Seattle Public Schools Teaching ‘Math Ethnic Studies,’” asks, “Who Gets To Say If An Answer Is Right?” The article poignantly opens with this sentence:

“Math, in case you didn’t already know, is racist.”

The article proceeds to lay out the plan of Seattle’s Public Schools to offer a course titled, Math Ethnic Studies for K-12 students discussing topics such as origins, identity, agency, power, oppression, the history of resistance, and liberation. Examples of questions considered to be “essential” include:

“Is there a place for power and authority in the math classroom?”

“Who gets to say if an answer is right?”

“Can you recognize and name oppressive mathematical practices in your experience?”

“How is math manipulated to allow inequality and oppression to persist?” 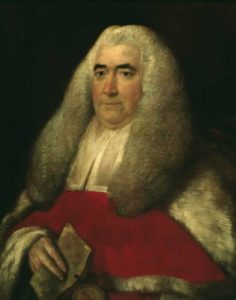 Additionally, The Daily Wire reports that, “Learning targets (for the course) include students valuing ‘their mathematical identity’ and the ‘potential that math can have on their freedom.’” The overall theme for the Math Ethnic Studies course is to “foster a sense of advocacy, empowerment, and action in the students that creates internal motivation to engage in and contribute to their identities as mathematicians.”

In short, the proposed program appears to “reduce mathematics to little more than a social justice course” with the potential to cause not only confusion but further the path of division so evident in our nation. Injecting agendas into an objective course like mathematics is contrary to what Sir William Blackstone and philosophers for centuries have agreed on, regardless of religion and socioeconomic status, that

Law, in its most general and comprehensive sense, signifies a rule of action; and is applied indiscriminately to all kinds of action, whether animate, or inanimate, rational or irrational…And it is that rule of action, which is prescribed by some superior, and which the inferior is bound to obey.

Until now, natural law and mathematical order has remained largely undisputed in secular classrooms. Why then, would we begin to question, alter, and dilute what has been proven for hundreds, if not thousands, of years?

The Divine Language of Mathematics

Galileo referred to mathematics as a language saying, “The laws of Nature are written in the language of mathematics … the symbols are triangles, circles and other geometrical figures, without whose help it is impossible to comprehend a single word.” In other words, mathematics gives us the ability to discover how the world and its contents work. Doesn’t it stand to reason then that if we corrupt the language of mathematics itself, we will lose our ability to understand our world and how it works? Interestingly, it was also Galileo who said, “I do not feel obliged to believe that the same God who endowed us with sense, reason, and intellect intended for us to forgo their use.”

A Better Way to Teach Math

Teaching mathematics in congruence with natural law not only prepares our children, but opens their minds and hearts to the beauty, creativity, complexity, intelligence, and individuality of our Creator God.

Teaching mathematics in congruence with natural law not only prepares our children, but opens their minds and hearts to the beauty, creativity, complexity, intelligence, and individuality of our Creator God. Click To Tweet

In the words of Sir William Blackstone, “Thus when the Supreme Being formed the universe, and created matter out of nothing, he impressed certain principles upon that matter, from which it can never depart, and without which it would cease to be.” Mathematics at Dayspring Christian Academy is taught in congruence with God’s Word and with respect to Him as a God of creativity and order. Additionally, the Hybrid Learning Initiative further enhances the exploration of mathematical principles and the discovery of knowledge and understanding of God through math.

What is the Hybrid Learning Initiative (HLI)? 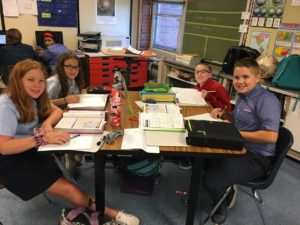 The Hybrid Learning Initiative, or HLI, refers to an instructional method that enhances characteristic face-to-face instruction with an independent learning activity and small group collaboration. The idea of hybrid math was a new concept to Dayspring when the school decided to implement it school-wide in 2013. Hybrid learning has been a great undertaking for our school, one from which we learned a great deal and were blessed to see students learn, as well. The HLI complements the philosophy of the Principle Approach. For instance, the small group direct instruction, interactive collaborative learning, and independent practice aspects of the HLI rotations highlight God’s Principle of Individuality in the sense that each child is designed uniquely in the image of God and thus will have varying learning styles, strengths, and weaknesses. Some students thrive in independent online computer work while others appreciate the face-to-face small group direct instruction from the teacher or the challenges of working collaboratively. HLI also supports the strength of the teacher-student relationship with small group instruction and data-driven individual assessment. Because of this, students are much less part of “the herd” in the HLI classroom. By far, teachers and students still express that working with/in small groups enhances the learning experience more than any other of the HLI characteristics.

Through the Hybrid Learning Initiative, Dayspring Christian Academy has increased and stabilized the purposeful use of technology within the classrooms to support the HLI rotations. Also, standardized testing results indicated—and surveys support—that students are learning and parents are noticing. Finally, the hybrid method encourages students to take more responsibility for learning, to engage personally with biblical ideas, to get their individual learning needs met, and it avails teachers and students opportunities to connect with each other on personal, academic, and spiritual levels. Dayspring Christian Academy will continue to use many aspects of hybrid learning in our classrooms.

Additionally, as Principle Approach teachers, being a living curriculum affords opportunities for creativity and connection to both the hearts and minds of our students. Math Department Chair Rebecca Detweiler’s enthusiasm for math can be seen in her classroom and in the classrooms of all of Dayspring’s math teachers.

Recently, Mrs. Detweiler tasked her department with including at least one non-fiction reading assignment in Dayspring’s hybrid learning stations, specifically the collaborative station. The goal is to prompt students to draw their own connections between math and God, the Creator. Teachers were provided with articles to read, but were also able to find their own articles to present to their classes.

Sixth-grade math teacher Donna Hurley chose to use the provided article Is Math Just a Tool? for her class.

Teaching Students How to Think, Not What to Think 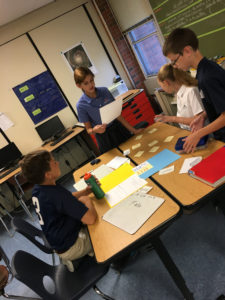 Written by Ron Tagliapietra, Is Math Just a Tool? discusses the statement that “some aspects of our lives, such as math, are just tools, neither good nor bad” and that “no Christian perspective is required to fully understand them.” Students read the article together and began to form their own conclusions.

True to Dayspring’s 4 Rs approach, Mrs. Hurley provided students with 7 vocabulary words and their sentences from the article to wrestle through. The students also had to turn to their companion dictionary—Webster’s 1828 Dictionary to define two words: atheist and transform.

Knowing it was a challenging task for her 6th-grade class, Mrs. Hurley had the students break into groups of 3 or 4, and read the questions that she had provided to them. After that, the students took turns reading the article to each other. Following each paragraph, students paused to check the vocabulary, reread the paragraph and discuss what they perceived the paragraph was saying. Each student took his/her own notes—their questions and ideas about the paragraph—before discussing each question as a group. At the end of their collaborative group time, the entire class came together to share their conclusions.

Mrs. Hurley challenged the class as a whole with this thought: The article’s author determined that math was created by God. Was it? Or was math always a part of God (His nature, His character)?

Mrs. Hurley reported that hearing her student’s interactions was enlivening! Some of the conversations she heard were: “No, math is neutral. See where it says…” “Yes, but he is just sharing others’ ideas there, I think.” “Yeah! After that he gives his own opinion, that math is good, not neutral.” “What does human endeavors mean?” a student asked. “Ah, I hadn’t picked that for vocabulary!” Mrs. Hurley said. So, as a class, they discussed it.

Collaborative activities like these encourage students to take dominion when they read any text so that they fully understand the information being presented to them. This is just one way that Dayspring students are prepared to think and reason from God’s Word and apply it to every area of life.