Giving Cause For Our Faith: The Christology Course at Dayspring Christian Academy

“I always knew that Jesus died for me, now I understand why.”

This comment by a former Christology student illustrates the importance of the 9th grade Bible class at Dayspring.

When approached several years ago to teach the freshman level Bible class, I was happy to do so, but also asked Dr. Myers if he would be open to a curriculum change. I explained that God had laid on my heart that we needed a course in Christology. He was willing to consider this, saying that he also had been thinking we needed a change in the Bible class at that level. After requesting and reviewing a suggested outline for the course, the headmaster gave the green light, and I began researching and preparing for this new course.

Now in its 5th year, I can honestly say that I believe this is one of the most important courses at Dayspring Christian Academy. And why not? The subject matter could not be any more important. This class deals with Jesus Christ Himself.

Some specific aspects of the course look at Christ’s eternal existence as one of the persons of the triune Godhead, His incarnation, earthly life and ministry, death, resurrection, ascension, current ministry and future return. Emphasis is given as to His preeminence in history and in the life of a believer. In addition to the historical and theological study of Christ, significant time is given in the use of apologetic arguments specifically dealing with the reliability of Scripture and Jesus’ historical reality, deity, crucifixion, and resurrection.

For example, in the fall, students were required to learn the logical argument popularly called “Lord, Liar or Lunatic.” This argument, based on the writings of C.S.Lewis, deals with the often cited but misinformed idea that Jesus was not God but was a good moral teacher. The freshmen not only learned this argument but had to present it to someone else. In so doing, students came to understand Lewis’ point which was:

A man who was merely a man and said the sort of things Jesus said would not be a great moral teacher. He would either be a lunatic–on the level with a man who says he is a poached egg–or he would be the Devil of Hell. You must take your choice. Either this was, and is, the Son of God, or else a madman or something worse. You can shut him up for a fool, you can spit at Him and kill Him as a demon, or you can fall at his feet and call Him Lord and God. But let us not come with any patronizing nonsense about his being a great human teacher. He has not left that open to us. He did not intend to. (Lewis, C.S. Mere Christianity. Harper, 1952) 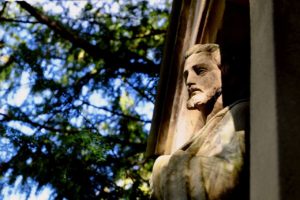 The course ends with a short study on various eschatological views with an emphasis on the fact that Jesus will return as King and Judge.

While there are too many details and activities to be listed in a short blog post, ultimately, the goal of this class, in accordance with the first and most important aspect of the Dayspring Christian Academy’s mission statement, is to encourage students to acknowledge the Lordship of Jesus Christ in every area of life.