The tragedy of 9/11 occurred three years before I was born. Although I was not alive during the suicide bombing of the World Trade Center or the later attempted bombings on the Pentagon, the devastation of the attacks was still a very real and present concept to me.

I remember my parents and grandparents recalling exactly where they were when the news was broadcast across the country, the news that America, the country we had felt so safe and secure in for so long, was now under obvious attack. A particular story that I remember was from my grandmother. She told me that when the World Trade center was attacked, she was teaching at an elementary school. All activities for the day had come to an abrupt halt as everyone gathered around small box TVs, watching in horror and disbelief as the pillaring smoke gathered above New York City. School ended early that day as students and faculty were sent home to support and be supported by their families. 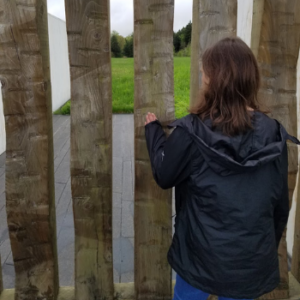 A student solemnly stands at the gate that guards the crash site of Flight 93 in Stoystown, PA.

As a teacher at the school, my grandmother waited with her students as parents arrived to take their children home. Although everyone was filled with a sudden sense of fear and uncertainty, one student was particularly affected. The student’s father had been scheduled to be on that plane; on one of the planes that had crashed into the World Trade Center. My grandmother was stricken with grief when she heard the news, but much to her surprise, the student seemed very at peace. The student reassured my grandmother, commenting that he knew that God had His hand of protection over his father and that everything would be okay. It wasn’t until later that the student’s family received the news that their father had miraculously missed his flight and had not boarded the plane that would eventually crash into the World Trade Center.

When I hear this story, I am particularly moved, not only by the student’s faith but also by the miraculous sparing of the student’s father. The story is a reminder to me that although the attacks caused the grieving of the entire nation, there were those who were directly affected. Every one of those passengers on those planes would be missed by someone, and every victim of that bombing had family or friends that would grieve on account of their absence.

The events that occurred on 9/11 seemed to me like they had always been a part of America’s history, just like how I thought airport security checks had always been a necessity, and the possibility of someone taking a bomb onto a plane had always been a rational concern. I realize now, however, that for my parents and many of the adults in my life, 9/11 changed a lot of things and some things that seem customary to me because I was born after the bombings were new to them because they lived through them. All things considered, the more I learn about these bombings the more I am incredibly sobered. I may not have lived through it, or even near the time it happened, but there will never be a day when I forget what happened on September 11th, nor a minute when I see that the time is 9:11 exactly and don’t shudder thinking back on the horrific tragedy that hurled my entire nation into grief.