Martin Luther and the Protestant Reformation

I will open my mouth in parables, I will utter hidden things, things from of old- what we have heard and known, what our fathers have told us. We will not hide them from their children; we will tell the next generation the praiseworthy deeds of the LORD, his power, and the wonders he has done. Psalm 78:2-4

Every year on October 31st, we as Christians have a choice of emphasis between the pagan Halloween and the Biblical Reformation Day. What an opportunity we have as Biblical Christians to teach our children and others this monumental event in the advancement of liberty! God calls us to a process of ongoing reformation, so it is imperative that we understand this world changing event. The Protestant Reformation was a time when the Biblical Christian worldview was restated and eventually revived. When the Bible was once again available to individuals, liberty of conscience was eventually restored.

American Freedom Linked to the Reformation

The Reformation, which began in 1517, is one of the most important events in history, second only to the birth of Christ. The freedoms that many people of the world enjoy, and to a greater degree, we as Americans enjoy, can be traced back to the act of an obscure German monk named Martin Luther. Luther, an Augustinian monk, the rector or President of Wittenberg University, challenged the intellectual community to a debate concerning one of the most grievous abuses of the Church—the sale of indulgences. His now famous “95 Theses” were 95 statements of opposition to the abuse of the sale of indulgences, “pardons from sin”. At that time, the sale of indulgences was a clever scheme to finance the construction of St. Peter’s Basilica in Rome.

The results of Luther’s rebuke were predictable—the sales of indulgences decreased, and opposition to Luther by church authorities began in earnest. The story is an exciting one; it is a tale of one man’s tenacious quest for truth against an all-powerful authority determined to stamp out that truth. But behold- the truth always wins! 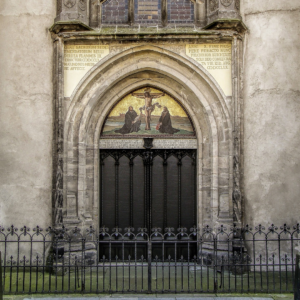 On October 31, 1517, to the doors of the Castle Church in Wittenberg, Germany, Martin Luther nailed his world-changing 95 theses.

Although at the time Luther did not realize the significance of the posting of these theses, scholars mark this date as the beginning of what has been termed the “Protestant Reformation.”

The Significance of the Reformation Today

Consider the significance to the church, to true believers, and to the world of these ultimate results of the Protestant Reformation as stated by author Paul Kienal:

1. The Reformation broke the tightly controlled religious monopoly held in the Western world by the Church for 927 years from 590 to 1517.

2. The Reformation obliterated The Church’s ban on the Bible.

3. The Reformation overturned the Church’s restriction on literacy and learning for common people.

4. The Reformation opened the door for unfettered Christian school education, which existed continuously from the first century but was suppressed by the Church.

5. The Reformation opened the door for women to be educated and to play a much larger role in society.

6. The Reformation paved the way for democratic forms of government and a free and open society.

7. The Reformation opened the world to the influence of biblical principles upon which so many human freedoms are based.

For these reasons and more, Reformation Day, October 31st is a day for celebration! Let us remember our great Christian heritage and teach it to the next generation!

Max Lyons serves as Director of Teaching Services at the Foundation for American Christian Education. He is a teacher, curriculum writer, and conference speaker, specializing in the areas of Bible, history, government, law, economics, and Biblical worldview. He has taught a Biblical worldview adult Sunday school class for two decades and served as teacher and administrator in three Christian schools since 1979. He holds a Bachelor of Arts in Mathematics from Virginia Wesleyan College, a Masters in Christian School Administration from Regent University, and a Ph.D. in Christian Education from Whitefield Theological Seminary. This article is copyrighted by The Biblical Thinker LLC.