Museum of the Bible Exhibit Comes to Remember America 2017

This year, the Remember America Speaker Series brings not only two extraordinary and dynamic speakers in Jay Sekulow and Lt. Gen. Jerry Boykin (Ret.) to the stage. The 2017 Remember America event also features a stunning exhibit from the Museum of the Bible, a new museum which will open in the fall of 2017 in Washington, D.C.

The nation’s capital will be graced with a brand new museum, just two blocks off of the National Mall. The Museum of the Bible places their focus on the Bible as a literary artifact while seeking to have people engage with the Bible. It documents the narrative, history, and impact of the Bible and has already amassed one of the largest assemblies of biblical artifacts and texts in the world.

An Evening to Remember

Dayspring Christian Academy Headmaster Dr. Mike Myers marveled at the opportunity God has given the school to bring the Museum of the Bible to Lancaster, PA. “We are so blessed to present a series of exhibits from the Museum of the Bible at our Remember America Speaker Series,” he said. “There is no other book in all of human history that has impacted civilization for the good more than the Holy Bible.  What could be more foundational, more important, more vital to America’s national security than the Word of God?  This will be an evening to remember!”

How the Museum of the Bible Began

The Green Family are well-known through the last two decades as founders and owners of the popular craft store Hobby Lobby. In 2009, the Green family bought their first biblical artifact. It was through the purchase of this artifact that a dream was born: the Museum of the Bible. While putting plans in place for the Museum of the Bible, the Green family collection has not been idle.

In 2011, the Greens opened a few traveling exhibits using around 400 artifacts from their private collection. These exhibits are called Passages and have been shown all over the world including in the Vatican in Rome, The National Cathedral in Havana, and The Bible Lands Museum in Jerusalem.

The Mission of the Museum

When building the Museum, each lens used to view the Bible is taken into account and represented.

While the Museum boasts a large number of artifacts, it will also boast a wide array of written artifacts that tell the biblical story. There are many different types of text in the collection including cuneiform (clay tablets), papyri, manuscripts, Torah scrolls, and original Wycliffe and Tyndale versions of the Bible. Through these different texts, the Museum seeks to show that it is not about a denomination, but rather, about the text of Scripture itself. The Museum centers their focus on the different historical narratives and facts that the Bible reveals. 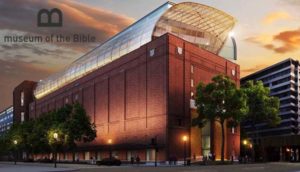 As a completed project, the Museum of the Bible will be an eye-catching form of architecture. The building itself will be 430,000 square feet, which will include eight floors as well as house five specific exhibit floors. The roof of the Museum will house a replica of a biblical garden and a ballroom to be used for banquets and lectures. In addition to the garden and ballroom, there will be a performing arts hall.

The Museum of the Bible seeks to bring the truth of Scripture to the world through thousands of artifacts. The leadership of the museum strives to provide evidence to observers so that in turn, the observers can make their own educated decisions and opinions on the Bible. The idea behind the museum is to get individuals to think about the evidence when forming an opinion, instead of relying only on an individual’s preconceived ideas.

The Museum has amassed many priceless artifacts pertaining to the history of the Bible and its presence across all continents. Listed here are just a few examples of artifacts that the Museum of the Bible will exhibit at the Remember America Speaker Series.

Remember America 2017: A chance to engage with the Word of God 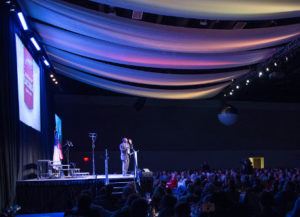 The Remember America Speaker Series Team is thrilled to have an exhibit from the Museum of the Bible as part of the Remember America event on April 21, 2017. The exhibit will be open to all ticket holders and is an exciting addition to the event. To purchase tickets or to become a sponsor, follow the links below. You do not want to miss this exciting exhibit right here in Lancaster County!