Unity Comes As One Nation Under God

The history of our Nation clearly illustrates the value of voluntarily applying the teachings of the Scriptures in the lives of individuals, families, and societies.

The Senate and House of 1983 stated in their petition that our early leaders, “including Presidents Washington, Jackson, Lincoln, and Wilson paid tribute to the surpassing influence of the Bible.” As modern-day Christians, we often look back at the faith of our early leaders for our inspiration. We don’t have to look back that far! In reality, our leaders, just 35 years ago, understood the importance that the Bible brings to society as a whole.

– The Bible, the Word of God, has made a unique contribution in shaping the United States as a distinctive and blessed nation

-The history of our Nation clearly illustrates the value of voluntarily applying the teachings of the Scriptures in the lives of individuals, families, and societies

– This Nation now faces great challenges that will test this Nation as it has never been tested before; and 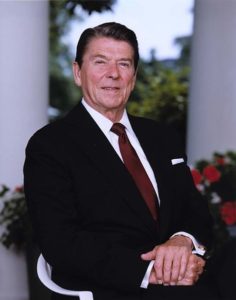 President Reagan, in his proclamation said,

“Today our beloved America and, indeed, the world, is facing a decade of enormous challenge. As a people we may be well tested as we have seldom, if ever, been tested before. We will need resources of spirit even more than resources of technology, education, and armaments. There could be no more fitting moment than now to reflect with gratitude, humility and urgency upon the wisdom revealed to us in the writing that Abraham Lincoln called ‘the best gift God has ever given man…But for it we could not know right from wrong.’” (3)

With the recognition of Congress that the unique contribution of the Bible in the shaping of the history and character of both our Nation and its people, a program of restoration began. (4) We can continue that restoration!

How? In the words of Rodney “Gipsy” Smith, a 19th Century evangelist:
“Go home. Lock yourself in your room. Kneel down in the middle of the floor, and with a piece of chalk draw a circle around yourself. There, on your knees, pray fervently and brokenly that God would start a revival within that chalk circle.”

Smith understood that restoration begins in the heart of the individual and flows outward to society. May we continue the restoration begun by our leaders in 1983.