Raising George Washington: His Education and The Principle Approach

“First in war, first in peace, and first in the hearts of his countrymen.” So go the words given in George Washington’s eulogy by General Henry “Light Horse Harry” Lee (the father of Robert E. Lee). Every February, we celebrate President’s Day, a holiday which originally was remembered as “Washington’s Birthday” (Washington was born on February 22, 1732), and actually still officially bears that name. This holiday has also been celebrated as Washington and Lincoln’s birthdays (Abraham Lincoln’s birthday being on February 12, 1809), but was given its current moniker when in 1971, Congress passed the Uniform Monday Holiday Act to create a number of three-day weekends throughout the yearly calendar. Now, this holiday is designated to celebrate all of our nation’s presidents.

At Dayspring, we say that the Principle Approach is America’s historical method of education. One of the best examples of this claim is the education of George Washington. Through studying the life of Washington and specifically looking at the education he received, one can clearly identify a number of Principle Approach distinctives. George Washington was one of the most remarkable men to have ever lived. His upbringing, including his education, have garnered much attention by biographers and historians alike for more than 200 years. He is often remarked to have been the most uneducated of the founders. This is true in the sense of formal education.

Due to family circumstances, George Washington was not only unable to pursue the foreign education that his two older half-brothers received, but he was also denied an opportunity to attend an American college. Due to his father’s death, young George’s formal schooling was cut short so that he could run and manage his widowed mother’s farm. Little is known about his formal education, but what can be gathered is the following: he received a basic formal education at approximately age 7 where he was taught the basics of reading, writing, and mathematics. By the time he was 15, his formal schooling was complete as he was required by his mother to run and maintain the family farm. However, he found numerous ways to further his education informally by intentionally reading worthwhile books and committing useful facts to memory. He had skill in mathematics, specifically in geometry and measurements, and he learned the trade of surveying. This trade set him on a path where he would meet prominent gentlemen, which set him on the path for his career as a landed gentleman, general, and of course, President.

Here is a brief compilation of some of the educational practices used in colonial times, by George Washington and his contemporaries and their teachers/tutors. These methods are as valid today as they have ever been, for they produce and develop the internal character traits required for good scholarship, and those traits transfer to good citizenship in any society. 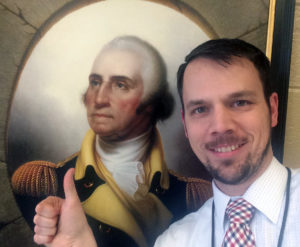 Upper school principal, Dan Stone, gives George Washinton a thumbs-up in celebration of George’s birthday. George Washington is an example of how a classical, biblical education can influence and shape the character of a man and his nation.

One of the most prominent books young Washington studied was the “Young Man’s Companion,” a work often used in colonial times to teach young men who might not have the opportunity for formal schooling. This book taught young men how to “Write letters, wills, deeds, legal forms, how to measure, survey and navigate, how to build houses, to make ink and cider, to plant and graft…how to doctor the sick…and how to conduct oneself in company”. As was common, the method of instruction for students was to copy, word for word, into a copy book. George Washington’s copy books are still in existence, and one can read how carefully he transcribed from the “Young Man’s Companion,” carefully noting problem after problem, rule after rule, letter after letter, etc. The Principle Approach emulates this method in a variety of ways, all with the end goal of having students record their work in their own hand and organize them into modern “copybooks” (3-ring binders as well as digital files) which will create a permanent record of their learning. Many historians believe that Washington’s “Rules of Civility” were written by him and at least partially inspired by this early portion of his education.

The Study of the Classics

When Washington’s father died, he was sent by his mother to the school led by Rev. James Mayre. While it is often believed that Washington received no formal schooling in languages, contradictory evidence exists. There exists in a historical collection, a Latin translation of Homer, and in the flyleaf of this work is an inscription, copied in Latin by 10-year old George Washington. Little to no evidence exists that he had any in-depth study of Latin, but this suggests that he was at least given an introductory level of instruction in this classical language. This practice (the study of Latin), once a staple of American education, is still practiced for no fewer than four years of a student’s tutelage at Dayspring Christian Academy. An understanding of Latin, even if rudimentary, helps the student better master the English language.

The Bible as Central Textbook and Source for All Learning

As was common in the era, George Washington was given what is the equivalent of today’s elementary school education by some tutors, including clergymen. One of the earliest documents bearing Washington’s handwriting was a sermon book belonging to the Bishop of Exeter. It is believed that this was one of the texts which, at the age of eight or nine, was being used regularly by Washington’s instructor to teach him both the Bible and the English language. There is overwhelming evidence elsewhere in primary source documents from the colonial and founding eras that children were taught to read and write by learning to ready and copy the English Bible. The earliest educational law was passed in 1647 and states: “It being one chief project of that old deluder, Satan, to keep men from the knowledge of the Scriptures…each town must appoint a teacher who will instruct the children in reading and writing”. In 1790, Lieutenant Governor of Massachusetts and signer of the Declaration of Independence Samuel Adams wrote to then-Vice President John Adams: “Let divines and philosophers, statesmen and patriots, unite their endeavors to renovate the age, by impressing the minds of men with the importance of educating their little boys and girls, of inculcating in the minds of youth the fear and love of the Deity and universal philanthropy, and in subordination to these great principles, the love of their country; of instructing them in the art of self-government, without which they never can act a wise part in the government of societies, great or small; in short, of leading them in the study and practice of the exalted virtues of the Christian system”.

Indeed, let us renovate our age by drawing upon the inspiration of George Washington and his contemporaries, instilling in our children a biblical education which will renovate 21st Century America. As the Executive Director of the Providence Foundation, Steven McDowell states: “Numerous people in America today agree that a lack of moral values is the root of the country’s problems, yet without a standard of moral absolutes rooted in a sovereign God and His truth, and without these being taught and lived in the homes, in the schools, in the government, and in the media, America as a nation will not be able to impart these needed morals”. May the example of George Washington be ever before us as we remember him on this holiday.