A Shaken Belief in American Exceptionalism

David Landon is an upper school history teacher at Dayspring Christian Academy. Born and raised in Scotland, David immigrated to America. The following is a letter he wrote to his students in response to the question, “Is America exceptional”? David now reads this letter to his tenth grade students on their way home from their two-day study in Washington, D.C. In a time when the founding of America and her core tenets are being questioned, David’s viewpoint as the recipient of American exceptionalism through immigration provides a refreshing alternative to the narrative prevalent our culture today.

Don’t ever let the term, “American Exceptionalism,” be hijacked to mean white supremacist, racist, elitist or American bigotry. The first person to actually term America as “exceptional” was the 19th century French political scientist, Alexis de Tocqueville. Western thought is not exceptional because it is in the West or because the “white man’s religion is the best.” Western thought is not exceptional because, “I think it is.” The ideas of liberty, equality and democracy are found in God’s Word. A government accountable to God and the people began when Moses received the law on Mount Sinai and the 70 elders represented the people, a government based on law (contractual) and covenant (relational) accountability.

Do Not be Ashamed for Being American 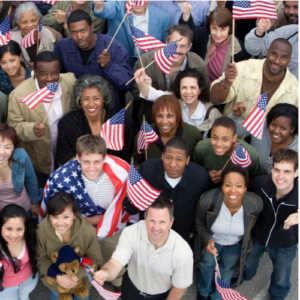 Secondly, don’t ever let anyone ever shame you for being an American or let others make you feel guilty for other Americans acting badly. Other people’s unethical behavior (past or present) should not caricature what it truly means to be an American. A stolen identity is identity theft, so don’t let others steal your identity. America is land of the free and home of the brave because you defend it. If you’re sick of seeing injustice and corruption, it’s because you still believe in truth and honesty. If you don’t like what America is or is becoming, don’t just complain about it. Do something about it. You are America. So, be an America that is radically transformed by the Gospel.

Walk the Path of Restoration

And lastly, don’t ever let anyone tear you down as a hypocrite simply because America does not always live up to its ideals. When Captain America’s uniform is torn that doesn’t mean we stay down in the mud and give up. Why? Because the Gospel demands we get back up. It’s a humble admission that we can make mistakes but still pursue the right, remedy the wrong and bring about restoration. Maybe de Tocqueville said it best when he stated, “The greatness of America lies not in being more enlightened than any other nation, but rather in her ability to repair her faults.” For Christians in America, our goal is to help bring about restoration. “All this is from God, who reconciled us to himself through Christ and gave us the ministry of reconciliation” (II Corinthians 5:18). When our relationship to God is restored, our relationship to our fellow man can be restored.

Growing up in Scotland I had no idea what an American was. I just knew my parents were Americans before moving to Scotland, and I knew they stood for what was true and honest, just, and good. I knew they loved other people, cared about them and truly had a desire to see people come to know Jesus. I thought all Americans were like them, so I thought America must be great. Of course, not all Americans are, but America is blessed because of Christians like them, and so am I. That’s why I’m thankful to be an American. To put it another way, I’m really thankful for what the Gospel has done for America, for my family and for me.

What Does American Exceptionalism Mean?

American Exceptionalism recognizes that America has been exceptionally blessed, and therefore we have a sacred responsibility to defend freedom and justice, not just for ourselves, but to those afflicted and oppressed at home and around the world. This will ensure, as Abraham Lincoln stated in his Gettysburg address, a ”government of the people, by the people, for the people, shall not perish from the earth.”

Our democracy and republican form of government were not copyrighted or protectionist. Our model of governance has been replicated around the world. Americans past and present have lived and died to secure a brighter future, and we have not ungratefully hoarded these blessing to ourselves. Our sacrifice was, and continues to be made to help other nations defend their life and liberty that they, too, could breathe those unalienable rights that beat in every human heart.

During WWI, Europe was entrenched in a conflict that would drag barbed wire across no man’s land for four grueling years. On July 4, 1917, a Fourth of July parade was held in Paris. The Americans had arrived! Private Otis E. Briggs wrote in his journal that crowds cheered, “ Vive L’Amerique!, Vive L’Amerique!” When General John J. Pershing commander of the American Expeditionary Force asked his staff officer to speak at Layfette’s tomb, Captain Charles E Stanton said these words,

I regret I cannot speak to the good people of France in the beautiful language of their own fair country. The fact cannot be forgotten that your nation was our friend when America was struggling for existence, when a handful of brave and patriotic people were determined to uphold the rights of their Creator gave them – that France, in the person of Lafayette, came to our aid in words and deed. It would be ingratitude not to remember this and America defaults no obligations . . . Therefore it is with loving pride we drape the colors in tribute of respect to this citizen of your great Republic, and here and now in the shadow of the illustrious dead we pledge our hearts and our honor in carrying this war to successful issue. Lafayette, we are here!

Lady Liberty’s copper bottom character would be tarnish in the country that had gifted her to the New World if America failed to grasp the torch France threw to her with faltering arms. Her light would be a symbol of empty promises, bad faith, and lost honor.

In his address to Congress for why America should join the war, President Woodrow Wilson stated, “the world must be made safe for democracy.” To ensure the safety of the French Republic, over 26,000 Americans died during the Meuse-Argonne Offensive alone.

Addressing the Questioning of American Motives 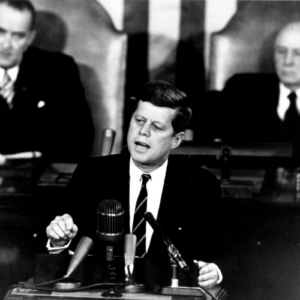 To those who may still be suspicious of America’s motives in helping the world for just economic, imperial or political benefit, President JFK’s inaugural address says it best.

To those new states whom we welcome to the ranks of the free, we pledge our word that one form of colonial control shall not have passed away merely to be replaced by a far more iron tyranny. We shall not always expect to find them supporting our view. But we shall always hope to find them strongly supporting their own freedom–and to remember that, in the past, those who foolishly sought power by riding the back of the tiger ended up inside.

To those people in the huts and villages of half the globe struggling to break the bonds of mass misery, we pledge our best efforts to help them help themselves, for whatever period is required–not because the communists may be doing it, not because we seek their votes, but because it is right. If a free society cannot help the many who are poor, it cannot save the few who are rich.

President Reagan reminded us of that with our exceptional blessing comes exceptional responsibility in his “Shining Upon a Hill Speech” in 1974.

We cannot escape our destiny, nor should we try to do so. The leadership of the free world was thrust upon us two centuries ago in that little hall of Philadelphia. In the days following World War II, when the economic strength and power of America was all that stood between the world and the return to the dark ages, Pope Pius XII said, ‘The American people have a great genius for splendid and unselfish actions. Into the hands of America God has placed the destinies of an afflicted mankind.”

Vietnam, the War in Afghanistan and Iraq, and America’s affluence have badly shaken America’s belief in American Exceptionalism. America has had some tough lessons in living and dying with the reality that not every nation can be helped or wants to be helped. When a clean victory is not in sight, we can grow weary in doing right. We can feel insecure, confused, and suffer from a lack of self-confidence when we split into partisanship. We’re in a bad frame of mind as a nation when we are so divided.

When we say, “God bless America,” it’s not just a slogan, or a bumper sticker, or a crass marketing strategy although it has been used and abused for all of the reasons above. However, the statement, “God bless America” is a foundational belief that with God’s blessing not only comes God’s favor, but also God’s enablement of America’s sacred responsibility to help the world for the greater good.

America is blessed not because America has always been on the side of right, but because the righteous have always fought for America to pursue the right. As a result, God has blessed America and the world and for that I say with heartfelt gratitude, ”Thanks Cap,” and “God bless America,” because this nation truly is exceptional.

Those who sacrifice thank offerings honor me, and to the blameless, I will show my salvation. Psalms 50:23

Dayspring Christian Academy is one of many Principle Approach schools in America and abroad. To learn more about our school, please register for a private tour or contact Karol Hasting at khasting@dayspringchristian.com or 717-285-2000.