Israel Is the Culmination of a Dayspring Education

It’s hard to say how many other schools in America incorporate a visit to Israel as the culminating field study of their students’ education. Too, it would be one thing to set down in the Holy Land for a sight-seeing tour. It is another matter entirely to experience Dayspring Christian Academy’s senior field study in Israel, which is titled “The Life and Ministry of Jesus” and reveals layer after layer of truth laid down in God’s Word. 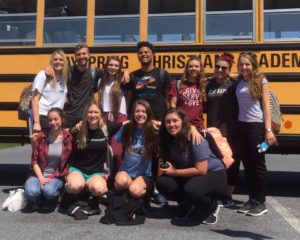 The 12-day study is open to all seniors and their families, and students begin raising money for the trip as early as freshman year. The majority of Dayspring seniors make the trip each year. The trip is led by Headmaster Mike Myers, Ed.D., as well as Randall Smith, Ph.D., who was an archeologist in Israel for 20 years and has his doctoral degree in Comparative Religion specializing in Judaism and rabbinic literature. Dr. Smith now serves as a pastor and Bible professor. “Dr. Randy,” as he prefers to be called, leads the group of students and accompanying family members on a pilgrimage that is designed to touch hearts with a personal encounter with Jesus in the land where He walked.

The study follows the model of other field studies Dayspring students have taken over the years. Wake-up calls come by 6 a.m., and the 55-passenger bus is loaded by 7 for a serious study, as in notebooks in hand with recording in said notebooks at each site. Students return to their hotels in the evening, warm from the Middle East sun, and worn from hiking the likes of Mt. Arbel, Tel Dan, and archeological and biblical sites from one end of Israel to the other.

Dr. Myers, also Dayspring’s founder, was inspired to bring students to Israel when he first visited the country in 1994 as a pastor at Lord’s House of Prayer in Lancaster. 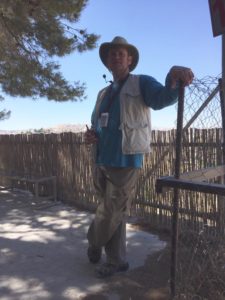 “I thought that our culminating field study would be to trace the Pilgrims journey from England to Holland to America,” he remembered. “The Lord told me as I was standing in Jericho for the first time that this is where the timeline begins. We had to bring the students to Israel.”

But the tour would look a lot like rocks or ruins if not for the excellence of Dr. Randy, who teaches from a deep understanding of the interconnection between the Bible, its contemporary history, archaeology, and cultures of the ancient world. He loves to show how standing on the ruins of an ancient place can enliven and explain comments found in the text of Scripture. Yet, he is quick to tell the students that “rocks don’t change people, Jesus changes people.”

“When students leave Israel after the field study, I want them to know three things,” Dr. Randy said. “First, the story is real, verified, and historical despite enormous attempts in the academy of the west to criticize it to non-existence. We do not follow cleverly devised myths.

“Second,” he continued, “Understanding the setting of the story is essential to understanding the Savior’s intentions in His teachings. Third, Jesus gave all for us, and made clear what He did and why. The right response is to give our all to Him.”

“I know of no one who can teach this field study better than Dr. Randy,” Dr. Myers commented. “He is a Bible scholar, biblical archeologist, a pastor, and he lived in Israel for 20 years. He knows how to bring the principles in Scripture to life in the lives of our students.”

Dayspring students can expect to walk away from this unique field study with hearts that somehow yearn to return to Israel. Two graduates of the Class of 2015 were so moved by the experience, they returned with the Class of 2017 for a second tour. 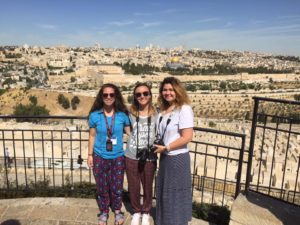 “To actually see the places where Jesus grew up and the locations where He taught was incredible,” said Rebekah Armstrong, who is one of the students who returned last spring. “It just put things into perspective and strengthened my belief. Now, when I read my Bible and see Caesarea or the Mount of Olives or Capernaum, I have a clear picture of what it actually looks like, and I find it much easier and more interesting to read. I was also struck by how big and how great and how faithful God was and is.”

Another student, Harry Valverde ’15, was moved by Dr. Randy’s teaching. “Dr. Randy walked us through Jerusalem, Galilee, Jericho, and the list goes on,” Valverde noted. “We see on the news that throughout the Middle East there’s terror and evil and bad things going on. But the moment you step foot on Israel soil, you feel the power of Jesus in your heart and the Holy Spirit doing incredible things.

“I remember when we went to the Sea of Galilee and had the chance to sit and have a little quiet time with Jesus,” he continued. “I remember just looking out into the distance and seeing how peaceful the water was. There were no waves, just the beautiful water. All I kept thinking was Jesus walked on this water and how incredible it must have been for his disciples to witness that. The trip was truly an amazing and life-changing experience.”

Cody Adams, Class of 2016, felt the trip gave him greater assurance of the existence of Jesus. “I’ve always known He walked the earth and lives in Christians today, but to be on the land where He witnessed to people was just a surreal and unforgettable experience,” he noted.

As many Dayspring parents, past and present, can testify, their lives have been deeply affected by traveling along on the school’s impactful field studies. The study in Israel was particularly meaningful for one Dayspring father who first went on the trip with his daughter in May of 2015. God used that field study to save him.

“When I went to Israel the first time, I was looking for answers,” said Jim Becker, father of 2015 Dayspring graduate Carly Becker. “I’d heard lies and half-truths from so many places and people that I was hoping to find and see some of the truth myself. I wanted to know if the Bible was literally historical or not. To see the archaeology back up what is in the Bible was a moving experience. Intellectually, I was able to determine that the Bible is historical.”

The turning point for Jim was Qumran in the northern Dead Sea region of Israel. It is where the Dead Sea Scrolls were found in 1947.

“The Dead Sea Scrolls revealed Daniel’s prophesy of Jesus’ coming and their dating proved that they were not written afterward,” he said. “Another significant part of the tour was seeing the brutality of the Romans and finding out so many of the disciples had been tortured and never renounced their faith in Jesus. They would have abandoned it if they had not seen Jesus and seen his miracles. So that was validity for the truth of the gospel.

“I don’t want to make it seem like you have to go to Israel if you are a skeptic,” Jim cautioned. “But, for me, it helped a lot. The trip played a big role in my salvation.” 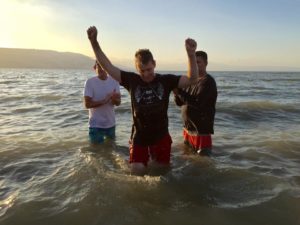 Five months after the May 2015 trip, Jim accepted Christ as his Savior. He returned to Israel with his family on the trip with the class of 2017 and was baptized in the Sea of Galilee.

Another parent, Greg Bontrager, made the trip with both of his children when they were seniors.

“The Israel field study opened new insights and increased my understanding of the culture and physical geography of the Bible,” Bontrager said. “From learning simple things about the significance of the fig tree in Jewish life, to the more complex cultural influences on first century Jews, and then experiencing first-hand the geography of Israel, it all gave me a more accurate understanding of the Bible’s accounts.

“Even with several years of study at a Bible college, I wasn’t aware of how much American culture influenced how I read the Bible,” he continued. “Dr. Randy Smith’s very engaging teaching style made the connection not only to our Christian worldview, but also challenged us to a deeper commitment to following Christ. Each day of the trip, the places we experienced demonstrated that our faith is rooted in history—in time and place, and we learned firsthand that current archeological discoveries continue to confirm the trustworthiness of Scripture.”

You Won’t Read The Bible The Same Way Again

“I always tell students, after this trip, you won’t read the Bible the same way again,” Dr. Myers said. “They now have the physical context and can picture where the events in the Bible happened. Students realize these were real people in a real land who had real problems and believed in a real God. The Bible is precious, reliable, and dependable.” 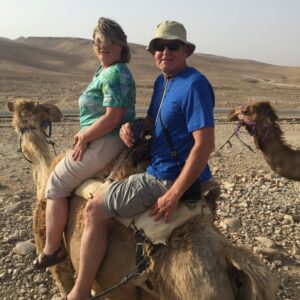 So, do many schools count the shores of the Dead Sea as a classroom? How many headmasters escort classes of students across the Judean desert atop a camel? How many parents of graduating seniors have their lives changed by Christ through their child’s field study? It must not be many.

This Dayspring experience is an important seed that is sown within those who make the trip to the Holy Land. It is one that changes the person from within only to extend outward from there to bear fruit—fruit that lasts.

The seeds sown by a Principle Approach education and watered by the relationships formed during our school years are continually producing good fruit in the lives of Dayspring students, parents, and alumni. To God be the glory! If you would like to learn more about Dayspring Christian Academy, call Karol Hasting at 717-285-2000 or schedule a personal tour.