For the Honor of 21 Seconds

This article was written by Upper School history teacher David Landon, who leads the 10th grade field study to Washington, D.C., each year. The two-day study includes time at Arlington National Cemetery, where students reflect on the character of the sentinel guard at the Tomb of the Unknown Soldier. This article first appeared in Dayspring Christian Academy’s Fall 2019 edition of Awaken Magazine.

In 1921, an unidentified World War I American serviceman was interred in Arlington National Cemetery. A 56-ton white marbled sarcophagus was set in place and inscribed with these words, “Here rests in honored glory an American soldier known but to God.” Since the tomb’s early days, a guard has been placed at the tomb on watch 24 hours a day, seven days a week, 365 days a year. No sentinel has ever abandoned his post despite weather, temperature, or terrorist attack.

I didn’t realize what the honor of just 21 seconds could mean until I reached the Tomb of the Unknown Soldier.

For 21 seconds, the only thing that moved was a trickle of sweat on the brow of a solitary sentinel.

For 21 seconds, the tomb guard stood as immovable as the marble monolith that marked the spot of the interred.

For 21 seconds, serenity was suspended in hallowed silence before …

“Snap!” The click of the sentinel’s plated shoes broke the stillness as he swung a 90-degree turn, standing respectfully for another solemn 21 seconds before walking 21 steps at a pace of 21 seconds, repeating the process once again 21 seconds later.

A 21-gun salute symbolizes the highest military honor that can be given. Many volunteer to have the honor of guarding the Tomb of the Unknown Soldier, but few are chosen. The execution and timing of each step must be meticulous. Training requires the memorized recitation of 35 pages of the history of Arlington (including being able to locate the burial spot of 300 veterans). “Walking the mat” with precision, maintaining uniform standards (two minor infractions and you’re out. These guys don’t complain about their dress-code or uniform), and meticulously executing outside ceremonial drills are all tested. Failure in any one test results in a transfer back to one’s company.

Once you’ve graduated from Airborne School, you can keep your wings forever. Once you’ve graduated Ranger School, you can wear your tab forever. Unlike any other badge and identifiers in the Army, sentinels can have their badge revoked for improper personal conduct. Even if a former sentinel has long since retired, if they commit a felony, receive a DUI, or are convicted of any other major crime, their name is stricken from the record and they lose their badge.1 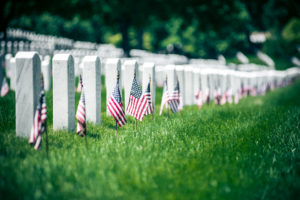 For the sentinels, nothing short of the pursuit of perfection will satisfy. Line six of the sentinel’s creed is the tomb guard’s motto: “My standard will remain perfection.” There’s a reason that volunteers from the 3rd Infantry are known as the Old Honor Guard.

This reminds me of James 1.4: “But let patience have her perfect work, that you may be perfect and entire, wanting nothing.” That word “perfect” means to be brought to one’s intended end or purpose.

Christians honor God and fulfill their intended purpose with consistent exercise in the habits of grace, which include discipline in Bible reading, regular fellowship with the body of Christ, and the practice of prayer. Click To Tweet

Christians honor God and fulfill their intended purpose with consistent exercise in the habits of grace, which include discipline in Bible reading, regular fellowship with the body of Christ, and the practice of prayer. The sentinels pursue their intended purpose in order to honor the Unknown Soldier, but in doing so they are honored, for in their discipline and devotion to the unknown, they make known to the nation and to the world what it takes to honor those who fought and died for our freedom.

At Mars Hill, the Apostle Paul came across a marbled stone to the “unknown god,” and he made known to the world the one, true God. Despite persecution, ridicule, shipwreck, and imprisonment, Paul was honored to live and die in the presence of the Ultimate Sacrifice, who died to set the captive free. May we too take our calling as that sacred and pour out our lives with as much devotion. In light of eternity, our lives are those 21 seconds, to make known to a dying world the living Christ.

All this, for the honor of 21 seconds.

Arlington is a picture of sacrifice, not self-indulgence, and selflessness, not selfies.

May we be inspired all the more to honor the living Christ by how the sentinels honor the dead. As Thomas Jefferson said, “Eternal vigilance is the price of liberty.” If this statement is true, may we find it an honor to daily die to self and live for Christ; share in the affliction of presenting Jesus, the “unknown god,” as the only One who is worth knowing; and stand as a living stone to a lasting liberty and freedom that will be engraved on the hearts of generations to come deeper than any inscription that can be carved into stone.

Dayspring Christian Academy partners with parents to raise citizens of excellence and character. At Dayspring, students learn to think creatively to become problem-solvers. With a high level of emotional and social intelligence, students can discern truth and meaningfully engage in persuasive discussions, applying Biblical principles to every area of life. To learn more about Dayspring Christian Academy, please call Karol Hasting at 717-285-2000 or register for a personal tour.

REGISTER FOR A TOUR