The Seed Principle: Birthing A Nation, Guarding Our Future

As is often the case, the theme for our 2017 Patriots Celebration Dinner related to one of the seven biblical principles of government identified in the Principle Approach. Today, our attention is drawn to Principle #6: “How the Seed of Local Self-Government Is Planted” or simply put, the Seed Principle.

We know that we cannot plant seeds of one kind and expect to reap a harvest of another kind. Seeds of any kind, which are planted and nurtured along the way will bear fruit over time, and the outcome can be formidable. It could be said that an oak forest is contained in a few acorns. Likewise, we see that a nation can spring from a few seed principles, and the kind of nation it will become is determined by the seeds sown.

In America today, many people do not realize that our form of government grew directly out of the Christian idea of local self-government. Even fewer people know how that important biblical seed was sown and grew in the hearts and minds of our foreparents.

The Seed Principle was key in uniting the Colonies under the spiritual and governmental principles of biblical Christianity, without which, the American Republic would not have been born.

J. W. Wellman succinctly outlined the impact of Christian self-government in a sermon written in 1857, where he stated:

“Our popular government lay in embryo on board the Mayflower, all-environed with its only possible preservatives, popular intelligence, and popular virtue. The idea born there, and embodied in a civil constitution … grew with the growth of the colonies, gradually expelling from the thoughts and affections of the people all other theories of civil government, until finally, it enthroned itself in the national mind, and then embodied itself in our national government.”

How did this happen and why is it important for us today?

It was Samuel Adams who further cultivated the seeds of local self-government planted by the Pilgrims by establishing what became known as Committees of Correspondence. Adams’ idea was to begin a correspondence group in Boston—kind of like a debate group with a record of the discussion to be passed around. He did this as a way of informing a complacent and distracted public as to what the government was doing behind the scenes. At that time, King George and Parliament were stealthily placating the colonists with superficial benefits, all the while shrewdly and systematically taking away more and more of their liberties. 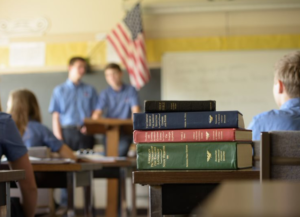 As Adams’ fledging Boston Committee faithfully spread its influence, nearby towns and cities began to form their own committees to respond to the letters they received from the Boston group. Noted historian Richard Frothingham wrote that “these communities had been planted under Christian influences, fixed in habits of personal independence, and invigorated by the customs of freedom.”

Beyond Sam Adams’ wildest dreams, biblical principles of government, private property, religion, and individual freedom were planted and nurtured throughout New England and eventually in each of the American Colonies. From that small beginning there grew a common understanding of the principle of Christian self-government, which ultimately broke the despotic control the mother country held over its colonial offspring.

Adams’ Committees of Correspondence showed that the power of ideas—both written and spoken—is undeniable. At Dayspring Christian Academy, you can witness how the seeds of truth are being planted and nurtured in the hearts and minds of Dayspring students through their Principle Approach education. These students are being given the tools to reason critically from biblical principles in the various spheres of life—rather than being taught how to conform to the patterns of this world. Take a moment in your mind’s eye and envision with me the influence they will someday have in their families and churches, in their communities, and, yes, even in our nation and beyond.

John Adams understood the incredible effect that resulted from Sam Adams’ plan for inculcating truth into the hearts and minds of the people of his day through the Seed Principle.

“When a certain masterly statesman invented a Committee of Correspondence in Boston, which has provoked so much of the spleen of Massachusetts, did not every colony, nay, every county, city, hundred, and town, upon the whole continent adopt the measure, I had almost said, as if it had been a revelation from above, as the happiest means of cementing the union and acting in concert.”

Understanding and defending truth is just as vital in our day as it was at our founding. If you have only one thought about our school, I hope it is that you can see that Dayspring Christian Academy is intentional about planting biblical principles in the hearts and minds of the rising generation. Our students are taught using the 4Rs of learning: Research, Reason, Relate, and Record so they have the leadership tools to affect every sphere of society with biblical truth.

Our work is crucial. To some, our mission may seem beyond reach, but as John Adams realized, we must not despise the days of our small beginnings. One of my favorite quotes—some of you will already know it—written by another intrepid Patriot, Noah Webster: “An immense effect is produced by small powers wisely and steadily directed.” That is Dayspring Christian Academy. 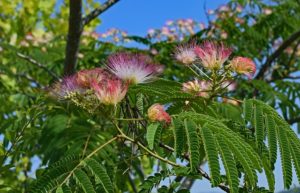 Education takes time and patience. We don’t always see immediate results from the seeds that are planted. It is kind of like the mimosa tree I had in my front yard for many years. I won’t go into the reasons why I had my son cut it down, but suffice it to say, it was a prolific producer of seeds. Each summer after the tree was gone, I would scurry around pulling out the little seedlings that had germinated from mimosa seeds. What really amazes me, is that just today, I was still pulling up mimosa seedlings years after the tree was cut down. Evidently, some of those seeds were hidden deep down in the soil and when exposed to the right conditions, they burst into life. So it is with humans. We don’t always see the immediate results from the seeds that are sown—good or bad. But as Christians, this we do know: God’s Word will not return void. Somewhere down the road, those seeds of biblical truth will burst into life, just like those mimosa seeds did.

And that mimosa tree fulfilled its biological mission with excellence, believe me. How about us? Will we band together in common cause to make sure that good seed—holy seed—is sown into the hearts and minds of our children as they grow up? Will we put the Seed Principle into practice?

The young people at Dayspring Christian Academy and the many others are our future. I am asking for your financial support of our mission to produce Biblical thinkers—men and women who will be leaders, whose influence and impact will move ever outwardly, first in their homes and churches, and then to their local communities, and to the broader realms of society beyond. From Dayspring’s halls Christian statesmen and scholars, business owners and homemakers—people of influence for Christ are going forth to their God-given calling.

It has always been a hallmark of Dayspring to serve like-minded families from every segment of society. We need your help to do that with excellence. The expense is great to attend a quality Christian school, but not offering this kind of education at this time in our history would be far costlier. Will you help us continue to plant those seeds?