3 Things That Could Not Have Evolved and Why

At Dayspring Christian Academy, as students are being taught to think biblically, they are challenged to look at secular philosophies and to research and discern problems with this worldly thinking. In the area of science, this often manifests itself in the critical analysis of evolutionary ideas. 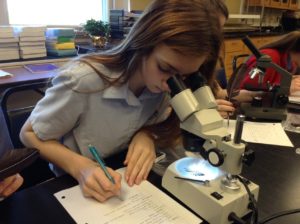 While there are many examples that students learn about, three will be highlighted here. The first is feathers. In their study of the animal kingdom, ninth grade biology students learn about the amazing structure of bird feathers. Branching off of the central shaft of contour feathers are smaller structures called barbs. These barbs make up the vane of the feather. Using microscopes, students are able to observe that smaller units branch off of these barbs.

Feather as seen through the microscope at 400X magnification. Small hooks can be seen on the right-hand side. Photo by Randy Gehman

These smaller barbules contain microscopic hooks that connect to neighboring barbules. When a bird feather is damaged, it can often be repaired by preening, the process a bird uses to draw the feather through its beak thus reconnecting the hooks to the neighboring barbules. Interestingly, the evolutionist claims that this complicated structure evolved over millions of years from reptile scales. But whereas there are a number of hypotheses that have been advanced, no one has been able to give a clear explanation for how such detailed structures could have come about through gradual processes. One big difficulty is the simple fact that reptile scales are really nothing more than folds in skin whereas feathers actually grow from follicles, unfurling to reveal their complexity as they emerge.

How does one go from a simple skin-fold to the precision-designed structure we see through the microscope? And whereas we have millions of fossil birds, not a single one shows partially developed feathers. It is much more logical to believe what Scripture says regarding the origin of birds by special creation as opposed to blind evolution.

Reptile scales as seen through a low power microscope.
Photo by Randy Gehman.

Another difficulty for evolution is DNA, RNA, and Proteins. Students begin to learn the basic design of DNA in 7th-grade Life Science. In High School Biology, they learn more details about the sophisticated language that codes for proteins in this molecular “twisted ladder.” DNA contains what is often called the “genetic blueprint” of the cell. In a process called transcription, the DNA molecule “unzips” in sections to reveal its genetic code. At these sites, mRNA molecules are formed which leave the nucleus and travel into the cytoplasm of the cell carrying within them the instructions for making proteins. These instructions are then translated and proteins are produced. But what is needed for the translation and transcription processes to occur? Proteins! So here, evolution has a problem greater than the proverbial “which came first, the chicken or the egg?” For indeed, DNA is needed to make proteins but proteins are needed to make DNA work.

In reality, DNA, RNA, and Proteins all need to present at the same time or the system breaks down and does not function at all. Biologist Michael Behe has coined the term “irreducible complexity” to describe complex systems which can not be simplified without losing functionality. Dayspring students learn not only about this case but other examples of irreducible complexity as well. 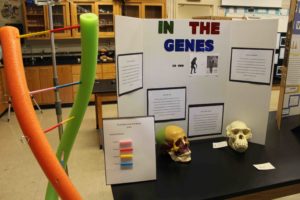 A Dayspring student’s display of their study of the comparison between chimp and human DNA. Includes student made DNA model.

Discussions of DNA lead us to a third additional impossibility for evolution, that being information itself. When one considers the structure of DNA, one must deal with the fact that it is an information-carrying molecule. While comprised of only four chemical “letters,” the DNA “language” contains all of the information needed for the functioning of human life. Each “rung” of the DNA ladder is made of two of these chemical letters. The entire human genome contains over 3 billion of these coded chemicals in a specific sequence. DNA is the most concentrated, intricately organized system of information in the known universe. To imagine such a complex language and information storage system arising by chance stretches the imagination. To make matters worse, for those who believe in evolution, there is not a single example that can be given of where new information has been documented to arise spontaneously. The only time information has ever been observed coming into existence is from other information, or from an information-giver! This begs the question, “From where did the information come?” As students study these things, they are challenged to evaluate secular views in light of Scripture and science. Dayspring students have the benefit of not just studying the natural world, but learning about the One who brought it into existence. In fact, our studies of science clearly reveal and logically direct our thoughts toward the Creator. As the apostle Paul stated:

“The wrath of God is being revealed from heaven against all the godlessness and wickedness of people, who suppress the truth by their wickedness, since what may be known about God is plain to them, because God has made it plain to them. For since the creation of the world God’s invisible qualities—his eternal power and divine nature—have been clearly seen, being understood from what has been made, so that people are without excuse.” Romans 1:18-20

If you would like to learn more about Dayspring Christian Academy, call Karol Hasting at 717-285-2000 or use the button below to schedule a personal tour.