The clash of worldviews in our nation has cascaded into our educational system, and a debate has arisen pitting the superintendence of the school against that of parents. The question on the table: Who is in charge of a child’s education? As with just about every issue on the table these days, there is a stark political divide between the answer to this question.

Proponents of public school posit that government schools must have autonomy in the education of children, and parents have little right to interfere. In an article entitled, Parents claim they have a right to shape their kids’ school curriculum. They don’t, the authors argue,

“Given this frenzy, one might reasonably conclude that radicals are out to curtail the established rights that Americans have over the educational sphere. Yet what’s actually radical here is the assertion of parental powers that have never previously existed. This is not to say that parents should have no influence over how their children are taught. But common law and case law in the United States have long supported the idea that education should prepare young people to think for themselves, even if that runs counter to the wishes of parents. In the words of legal scholar Jeff Shulman, “This effort may well divide child from parent, not because socialist educators want to indoctrinate children, but because learning to think for oneself is what children do. 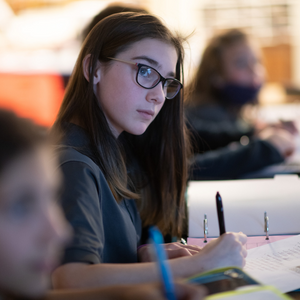 When do the interests of parents and children diverge? Generally, it occurs when a parent’s desire to inculcate a particular worldview denies the child exposure to other ideas and values that an independent young person might wish to embrace or at least entertain. To turn over all decisions to parents, then, would risk inhibiting the ability of young people to think independently. As the political scientist Rob Reich has argued, “Minimal autonomy requires, especially for its civic importance, that a child be able to examine his or her own political values and beliefs, and those of others, with a critical eye.” If we value that end, “the structure of schooling cannot simply replicate in every particularity the values and beliefs of a child’s home.”

The article did acknowledge that “parents have great authority when it comes to deciding how to raise and educate their children” — great authority, not absolute authority. It suggested that if parents didn’t like what was happening in public schools, they had the right to go elsewhere. Of course, this is true. Certainly we don’t have the right or power to change everything about the curriculum in government schools, because there are many worldviews represented in that sphere. (Perhaps avoiding inculcating children with an instructor’s or administrator’s personal worldview and presenting all sides of an issue with equity could help avoid vitriol in the ideological divide and truly help children decide for themselves, but that’s a topic for another article.)

But the question remains, who is primarily responsible for a child’s education?

Let’s Not Feed the Divide

One thing I’d like to avoid in this commentary is a politically fueled fracas that feeds the divide. Indeed, when I read this article my initial reaction was a bristling at the arrogance of the elite establishment. But that’s political speak. And I don’t want this argument to be political. I want it to be biblical. Because it is.

If relativism is true, then what this article is saying is spot on. If truth is in the eye of the beholder, then parents certainly do have a responsibility to make sure their children are free to explore their own truth, and even encourage exploration of various perspectives in order to land on the one that’s right for them. But if the truth is absolute, then parents have a responsibility to lead their children to it while exploring opposing views as a means to defend their faith. Christians affirm the latter.

Where Authority for Education Lies 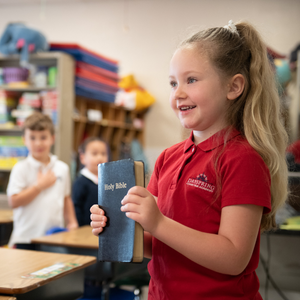 Biblically speaking, parents do and must have absolute authority over the education of their children.

Noah Webster contended that the responsibility of educating children falls on the shoulders of parents. Even parents who send their children to public school are primarily responsible for making sure Christ is exalted in the things their children are learning while identifying and calling out teaching that is antithetical to biblical instruction.

It wasn’t until the advent of public school and the influence of people like Horace Mann and John Dewey that the government started to reach into a realm that had long belonged to parents. The shift was so gradual that it was practically imperceptible. Now government schools are so far off base, few people realize what the base was in the first place, and millions of parents have been content to abdicate their responsibility as the primary source of instruction for their children.

The shift in ideology in public education did not change or negate the biblical mandate for parents to “train up a child” (Proverbs 22:6). God has a lot to say about the education of children. From Deuteronomy to Proverbs to Ephesians, it is clear that God meant for the education of children to be under the purview of parents. The Bible commands parents to train up, bring up, teach diligently the discipline and instruction of the Lord. Not just on Sundays. But “when you sit in your house, and when you walk by the way, and when you lie down, and when you rise” (Deuteronomy 6:7). God feels so strongly about biblical instruction for children that he warns, “whoever causes one of these little ones who believe in me to fall away—it would be better for him if a heavy millstone were hung around his neck and he were drowned in the depths of the sea” (Matthew 18:6). Parents must not abdicate their God-ordained oversight to any entity outside of their sphere of influence.

Where Christians Should Send Their Kids to School 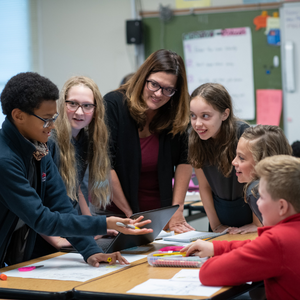 Where Christians send their children to school is a decision that must be made within each family. It is true that sending a child to a private school takes sacrifice and commitment, as does making the decision to educate in the home. Sending a child to public school is obviously more financially viable, but for a Christian parent it must be done with eyes wide open. The diversity of worldviews in public schools could lend itself to deeper faith if parents remain vigilant in teaching truth at home, and calling out falsehood in their child’s curriculum against the backdrop of the Bible.

Whether choosing private school, homeschool, or public school, it falls on parental shoulders to pray with intention and deliberation for their children, keeping ever before them Elohim, the Creator God, who commissioned parents to bring their children up in a way that will glorify him and allow them to enjoy him forever.