A Call To Prayer – Lessons From The Civil War

On May 18 & 19, 2017, the sixth grade class of Dayspring Christian Academy toured the battlefields of Gettysburg. As with any Field Study at Dayspring, parents are invited and encouraged to attend. It was my honor and privilege to attend this year’s Gettysburg field study. This blog isn’t about the trip in general terms, but how the Lord worked in my heart through this study.


Standing on the battlefield with General Meade’s monument behind us, we listened to story after story of heroic chaplains fighting to minister to wounded and dying soldiers. As we readied for prayer, behind us and before us (but not over us), lightning began to strike the earth. It seemed, indeed, that the earth was groaning and suffering (Romans 8:22), even begging for us to pray to its Creator. 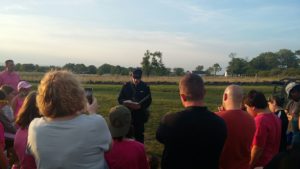 As if on cue, Chaplain John Wega asked us to pray, but not just any prayer. Together, on the battlefield where so many had laid down their lives, our voices prayed aloud together Abraham Lincoln’s Gettysburg Address:

Four score and seven years ago our fathers brought forth on this continent, a new nation, conceived in Liberty, and dedicated to the proposition that all men are created equal. Now we are engaged in a great civil war, testing whether that nation, or any nation so conceived and so dedicated, can long endure. We are met on a great battle-field of that war. We have come to dedicate a portion of that field, as a final resting place for those who here gave their lives that that nation might live. It is altogether fitting and proper that we should do this.

But, in a larger sense, we can not dedicate — we can not consecrate — we can not hallow — this ground. The brave men, living and dead, who struggled here, have consecrated it, far above our poor power to add or detract. The world will little note, nor long remember what we say here, but it can never forget what they did here. It is for us the living, rather, to be dedicated here to the unfinished work which they who fought here have thus far so nobly advanced. It is rather for us to be here dedicated to the great task remaining before us — that from these honored dead we take increased devotion to that cause for which they gave the last full measure of devotion — that we here highly resolve that these dead shall not have died in vain — that this nation, under God, shall have a new birth of freedom — and that government of the people, by the people, for the people, shall not perish from the earth.

By the time our prayer had finished, the lightning had ceased, the sun had fully set, and our tired group of students, teachers, and parents boarded the bus to head back to camp. 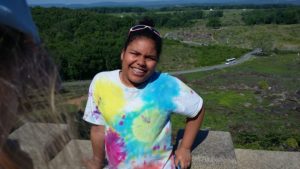 As a Dayspring parent, this was not my first field study, However, it was perhaps the most memorable field study for this school year. As we took the winding roads back to our camp for the night, I found myself mulling over the words I had just prayed and the stories of courage and sacrifice I had just heard. I found myself saddened for the state of our country, yet hopeful that “the new birth of freedom” our group had just asked the Lord for would come to pass.

I’m sure the days of the Civil War felt dark and hopeless for both sides. But as we know, our country was rebuilt, a new era of freedom came to pass, and our country overcame the division and hardships that had both brought on the Civil War and followed it.

In the days that followed this study of Gettysburg, I found myself reflecting often on what I had learned and in prayer before the Lord for our nation. I contemplated the words “this nation under God.” I asked the Lord, “Are we really still a Nation under You?” 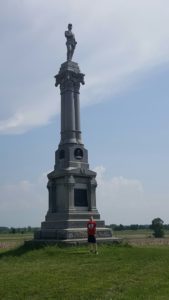 The Dayspring field study is a rich opportunity for both students and their parents. I’ve heard parents say that some of the trips they’ve been on have changed their lives. I, too, have been challenged and changed. The Dayspring education is one of a forging of character for the student. I’ve seen amazing growth in each one of my children as they continue their educational journey at Dayspring. The residual effects of a robust education like the Principle Approach for me have included the growth of my own knowledge and the deeper forging of my relationship with my Lord and Savior, Jesus Christ.

As we emerged from our tents to ready ourselves for a day on the battlefield once again, I was reminded that Lord’s promises are true and they always come to pass. Despite the feelings of darkness and hopelessness that can easily surface in the world today, I awoke with hope, courage, and peace.

When Abraham Lincoln gave his call to prayer on March 30, 1863, it was a call to BOTH sides of the conflict to turn back to the God it had seemed they had forgotten:

“…We have been the recipients of the choicest bounties of Heaven. We have been preserved, these many years, in peace and prosperity. We have grown in numbers, wealth, and power, as no other nation has ever grown. But we have forgotten God. We have forgotten the gracious hand which preserved us in peace, and multiplied and enriched and strengthened us; and we have vainly imagined, in the deceitfulness of our hearts, that all these blessings were produced by some superior wisdom and virtue of our own. Intoxicated with unbroken success, we have become too self-sufficient to feel the necessity of redeeming and preserving grace, too proud to pray to the God that made us!” 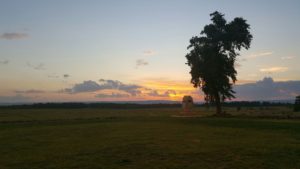 We Americans have been the recipients of the choicest bounties of Heaven. We have grown in power, numbers, and wealth as no other nation has grown. We have become too self-sufficient to feel the necessity of redeeming grace. We are too proud to pray to the God who made us.

And My people who are called by My name humble themselves and pray and seek My face and turn from their wicked ways, then I will hear from heaven, will forgive their sin and will heal their land. 2 Chronicles 7:14 (NASB)

If you are interested in joining a robust community of students, teachers, and parents as we fight to restore America to her Christian foundation by educating our children with a biblical worldview, please call Karol Hasting at 717-285-2000 or use the button below to schedule a tour.