Worldview and Why It Matters

I know, I know. Everyone bandies about the term worldview these days. I remember when it first came on the scene. The concept wasn’t really new, but it now had an accessible name. Over the years the terms Christian worldview and Biblical worldview have become almost cliché among Christian educational institutions, appearing nearly universally on websites. Most school mission statements claim to develop one of these in their students. And that is a good thing. Actually, a great thing…if it really happens. 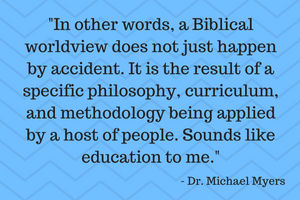 I am a firm believer in intentionality. (I am also quite familiar with its counterpart—unintended consequences, but I will leave that for another discussion.) An old axiom comes to mind when I think of intentionality: “Those who fail to plan, plan to fail.” In other words, a Biblical worldview does not just happen by accident. It is the result of a specific philosophy, curriculum, and methodology being applied by a host of people. Sounds like education to me.

Of course, not all education takes place in a classroom. We have to keep in mind that the Christian school can only go so far in building a Biblical worldview in its students. There are many other factors and forces at work that will either facilitate or undermine the best efforts of the local Christian school, like the home, the entertainment/news media, and social media.

That being said, in view of the fact that over the course of the academic year, students spend most of their waking hours in school or attending school-related activities, it is obvious that school matters along with all the philosophical undercurrents, innuendo, and subtleties that accompany it. That is where intentionality comes is.

Schools must not only teach the basic academics necessary for productive citizenship, they must help develop the skills and talents that round out a fulfilling life. Now, put on top of those huge concerns the intentional development of a Biblical worldview and you can see why the track record hasn’t been very good. (If you question my assessment, just look around at American society. Has it gotten more Christ-like or less Christ-like in the past 25 years? I think you get the picture. Christians have not been winning the culture war.)

So, what’s the answer? Give up? Accept the status quo? Give into the current culture in order to remain relevant? Unfortunately, that is typically how it goes. Dan Smithwick encountered the very same dilemma some 30 years ago when he started exploring the steady demise of the traditional Judeo-Christian values that built America. Mr. Smithwick noticed the drifting of America from its founding principles—Biblical principles. He went on to found the Nehemiah Institute with its centerpiece worldview assessment tool, the PEERS Test, along with a comprehensive Biblical worldview education program for young people and adults.

Smithwick’s own self-education in the worldview arena and its connection to America past and present (as well as its implications for the future) led him to develop a series of statements that fell into five categories, each of which greatly affect societal life: Politics, Economics, Education, Religion, and Social Issues. Hence, the acronym PEERS. Smithwick began to chart the results of the test, segmenting the test-takers into two groups: Christian students who attend public schools and Christian students in Christian schools.

An interesting side-story to the PEERS Test saga is how Dan Smithwick discovered Principle Approach education. Almost immediately, a subset of students stood head and shoulders above the other students taking the test. With a little research, Smithwick was able to ascertain that some Christian schools are much more intentional in developing a Biblical Christian worldview in their students than are traditional Christian schools. He termed these schools “Worldview Schools.” Mr. Smithwick’s further research led him to schools that employed the Principle Approach along with its founding institution, the Foundation for American Christian Education (FACE).

The results of the PEERS Test over nearly 30 years of use have shown a steady decline in the degree to which Christian students embrace and demonstrate a Biblical Christian worldview in the five PEERS categories, with notable exceptions: “worldview” schools and homeschooling. The students in these schools, which include Principle Approach schools and Classical Christian schools, have not lost worldview ground, as have their counterparts in other educational settings. A snapshot of the testing trends over the years from 1998 through 2015 shows the relative position of the different testing subgroups as well as their placement in the worldview grid. 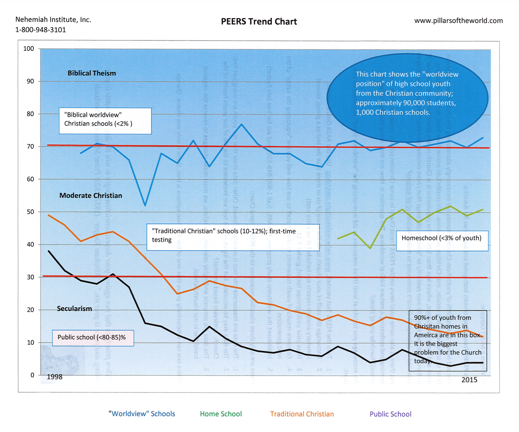 Obviously, this steady decline in scores has not happened in a vacuum. There is always a cause behind some effect. While there are several (many) variables that affect worldview formation, the purpose of this article is to look at one of the more influential contributors: schooling.

From it onset, Dayspring Christian Academy has included Biblical worldview acquisition a priority of its mission. The Principle Approach® is especially effective at forming a Biblical worldview in its students due to its emphasis on reasoning from the Biblical principles that govern each school subject and then applying them to every aspect of life. This historic, classical Christian methodology is the kind of education that produced the men and women of America’s founding who could reason from Christian principles to create the great documents that forged our nation.

Dayspring entered the PEERS testing arena in 1995 as we were preparing for our first graduating class. We recently completed an audit of how we have fared over the years in this critical area. Some of the insights gleaned from this recent analysis include: 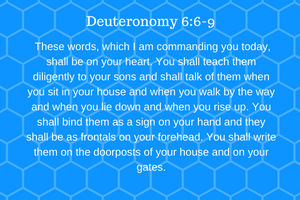 The Bible is very clear about the importance and methodology for instilling a Biblical worldview in children. The goal is to see the world as God sees it, rather than through the humanistic mindset of man. Deuteronomy 6: 6-9 paints a beautiful picture of the breadth and depth of worldview training that must be employed to fashion the thinking of children. These verses present an intensive approach of saturating the life of the child with Biblical truth and discussion—learning to think and reason from the truth of God’s Word. Without this, Christians are poorly equipped to offer credible solutions to the many dilemmas the world faces. Rather than being salt and light in a dark world, we often see young adults drifting (or running) from the paths of righteousness to embrace a worldview set in clear opposition to Creator God.

And that is why worldview matters.