The students in Mr. Fleetman’s 10th-grade Introduction to Art class participated in a debate on February 8, 2017 about President Trump’s proposition to defund the National Endowment for the Arts (NEA). In recent years, the NEA had been associated with many works of art that can be deemed questionable to the average art critic. President Trump argues to defund this organization would save 10.5 trillion taxpayer dollars over the next ten years alone. Supporters of the NEA argue that defunding the NEA would cause the U.S. to also lose revenue that they would usually make off of the sale and display of the works of art made by those who receive the grants for the creation of these pieces of art. 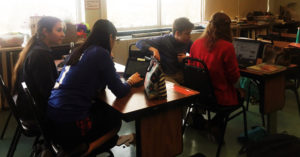 “Introduction to Art” students research affirmative and negative viewpoints of funding the NEA.

The National Endowment for the Arts is an organization formed in 1965 by Congress to nurture American creativity by giving grants to different artists to create art pieces which are later displayed as national works of art.

The negative position of this debate had the opportunity to listen and evaluate the arguments of the affirmative position, before expressing their argument for the continued funding of the NEA. 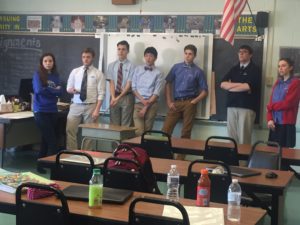 The affirmative position presents their argument for the defunding of the NEA.

The negative position of the debate argued that there should be continued funding of the NEA because there are many artists that cannot afford to make their pieces of artwork. The negative argument concluded that, if American artists not encouraged and aided in their production of their art, then American art culture is left in the hands of the wealthy. There was also a point made that the organization only receives about $0.46 from each taxpaying citizen which is less than the cost of a stamp.

Mr. Fleetman exposed strengths and weaknesses in the arguments of both teams, and ultimately declared a winner for the debate.

The affirmative position won the debate predominately due to their strong closing argument that the U.S. produced many wonderful works of art before the NEA was even established.