The Fascination of the Holy Land in Four Categories

Just prior to graduation each year, Dayspring seniors visit Israel as their culminating field study. This year, several staff members made the journey as well. Leslie Schmucker, director of the school’s P139 program, was one of them. In this blog, she outlines how our students can experience the fascination of the Holy Land in four categories.

How to explain Israel. Of all the places on the planet earth, God chose this tiny tract of land, smaller than New Jersey, as the backdrop and stage of His story of redemption. I found myself wondering why more than once, as I surveyed the landscape from the tour bus window. In the north, the climate is wetter, the scenery greener. Not Lancaster County green, but green for the Middle East. A mere ninety minutes south, a seemingly impossible change in the landscape finds you in a land of rugged, barren beauty, in stark contrast to its northern region.

For me, the fascination of the Holy Land is made manifold in four categories: biblical, cultural, historical, and geographical. 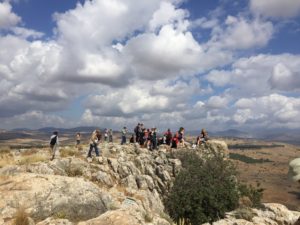 As a Christian, I am challenged to describe the depth of wonder over standing where Jesus stood, and walking where he walked. Our guide, Dr. Randy Smith, reminded us often that there is nothing special about the rocks. And he’s right. There is nothing mystical about standing in the spot where Paul made his appeal to Festus and his speech before King Agrippa in Acts 25, or atop Mount Carmel, where Elijah called down fire to silence the prophets of Baal in 1 Kings 18, or gazing across the Valley of Jezreel to the spot where Elisha healed the widow’s son in 2 Kings 4 and Christ did the same in Luke 7, or looking over the cucumber field that was the very spot where David smote Goliath, or in a cave home very near (if not in the exact spot) where Jesus was brought up in Nazareth, or the Judean Wilderness where Jesus passed the test against Satan in Matthew 4, or by the shores of the Sea of Galilee where Christ called his disciples, or looking on the street where he healed the hemorrhaging woman in Luke 8, or in the very synagogue in Capernaum where Christ did much of his teaching, or in the cave home in Bethlehem where Jesus was born, or on the very spot where Christ died for me. No, there is nothing mystical. Still, though the Bible is self-authenticating and needs no outside corroborative evidence as to its validity, somehow your blood pumps a bit faster when you see in stone (literally) what you’ve been reading about your whole life. It’s all there, strewn across hillsides, on mountains, below the earth, marked by pilgrims and churches, preserved through word of mouth and archaeology, affirming the very words of God.

The diversity of the population of Israel and its tourists that roam the countryside and clog the cities is a people watcher’s dream! We Lancastrians are used to the uniqueness of the Amish, but Israel takes cultural diversity and uniqueness to a new level. We got a taste of it in the airport, as some of our flight mates were Orthodox Jews, complete with side locks, prayer shawls with tassels dangling from beneath their shirts, long beards, and black hats or yarmulkes propped atop their heads. Before the flight, on the plane, and during the layover they could be seen facing east, prayer book in hand, phylacteries jutting from their foreheads, rocking back and forth in fervent, and seemingly urgent, prayer.

The sights in Tel Aviv, with its resort beachfront and bustling city life, were familiar to our western eyes. However, a short bus ride outside the city found us very far from western familiarity. From north to south, we beheld a multifarious mixture of Arab Muslims, Arab Christians, secular Jews, Orthodox Jews, Ultra-orthodox Jews, Bedouins, modern farmers, shepherds, and, Babel-like, tourists chattering away about all of it in their native tongue. 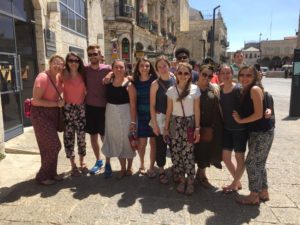 Nowhere else is the cultural diversity of Israel more apparent than in Jerusalem’s Old City. Within its walls sit four cultures in four quarters, comprising a space of roughly one-third of a square mile. Walking through the Muslim quarter is like going back in time. It is here that you can imagine what it was like in Jesus’ day. Vendors selling their wares in tiny stall-shops which line narrow passageways, nearly unnavigable because of the crowds. Men pushing rough-hewn carts over the uneven stones, parting the crowd to move their goods to their stalls. Beggars sitting on corners pleading for shekels for their sick children. After crossing a small street, you enter a different culture, the Jewish quarter, with its wide plaza rimmed by shops and eateries, and leading into the Western Wall Complex and Temple Mount. Orthodox Jews, heads covered, apparel revealing their level of orthodoxy, mill about, going about their lives among the throng of tourists. Walk not far in another direction, and you find yourself in the Christian Quarter, with its stone fountain in the center of another plaza, rimmed with shops, and the Holy Sepulcher, the Church built atop Calvary. The Armenian Quarter, with orthodox priests, churches, and schools, completes the tour. 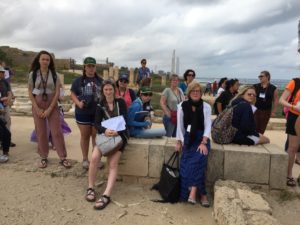 Archaeologists and churches throughout the ages, and to this very day, have marked the history of Israel. Dig sites reveal homes, theaters, markets, city gates (mentioned throughout the Bible), pottery, and other artifacts that offer a glimpse into the daily lives of the people of antiquity. Perhaps the most fascinating history throughout the whole land is the pervasive influence of Herod the Great and his children. The ruins of great and decadent palaces, displaying Herod’s narcissism, cruelty, and paranoia, range from mountain tops like Masada and the Herodium, to sprawling cities like Caesarea Martima, which sits on and in the Mediterranean. An engrossing site is a thirty-foot deep dig that uncovered the great city of Scythopolis, one of the ten cities the Bible calls the Decapolis. In the northern part of Israel stands a four-thousand-year-old gate from the time of Abraham, the entrance to a Canaanite city. Abraham would have passed this gate on his way to pursue the northern army in Genesis 14:14. Ancient high places still exist, allowing you to envision the pagan rituals that happened there. Israel is replete with history, the ruins of which pervade the landscape. 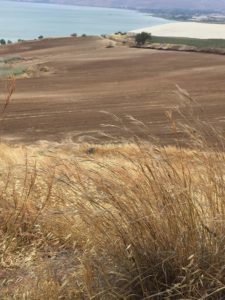 Perhaps the most lasting impression for me personally is Israel’s geography. When you look at the size and scope of the country, reading the Bible takes on new meaning. You are able to see how Elisha was able to see the Shunammite woman’s servant from far off in 2 Kings 4. The mountain is high and the valley is sprawling, allowing you to see for miles. Jesus’ ministry largely took place in a four-mile triangle. Sitting atop the Mount of Olives allows you to survey the distance the disciples walked from Jerusalem each evening. Seeing the rocky shores of the Sea of Galilee, the sloping sides of the Mount of Beatitudes, the surreal beauty of the Golan Heights, the steep hills in Bethlehem and Nazareth, the brown, desolate, yet somehow majestically beautiful Judean Wilderness, and the towering cliffs overlooking Galilee, put every Bible story that took place in the promised land into complete perspective. Questions I had about the logistics of some of the stories are answered, as I can picture where an event happened as I read about it. Israel is a barren, dry, beautiful and terrible landscape that I would return to again and again. Somehow being on its soil feels like coming home.

Many sites around Israel have a marking on them called an in situ line. Below this line, the stones in the dig are in their original position. Often, archaeologists will build above the stones to preserve them, or to help make clear what the original structure looked like. Seeing the in situ lines reminded me that Jesus Christ, who was born in that land, lived in it, died for me in it, and was raised and ascended from it, is my in situ line. Every part of me that is under Him is in its original position, unmoved by the effects of sin. One day I will gaze upon Him in the New Jerusalem, glorified and completely sanctified, along with my Hebrew brothers and sisters in Christ. May that day come soon!

To learn more about Dayspring Christian Academy and The Principle Approach, please contact Karol Hasting at 717-285-2000 or schedule a private tour using the button below.