America’s Sacred Story: The True Story of the Pilgrims

Noah, The Quarantine, and The True Ark of Salvation

Recently, a striking image has circulated Facebook. It is a depiction of Noah’s Ark being tossed by the waves in a storm with the statement “first quarantined family.” If you know the biblical account of Noah’s Ark, then you will know that Noah and his family, eight people total, were chosen by God to be saved from His judgement on the earth. This judgement came in the form of a flood, and Noah and his family were “quarantined” inside the ark.

Most of us can begin to relate to what Noah must’ve felt quarantined inside of the ark. Just as we are sheltering in place to preserve human life, God quarantined Noah and his family, along with two of every kind of living creature, inside the ark to save their lives. There are many parallels that can be created from the biblical account of Noah to our present time in quarantine:

The parallels are certainly interesting to think about but we cannot overlook the fact that God, a loving and merciful God, does bring judgement upon those who oppose him (James 4:6), but he always provides a way for the righteous to escape (Psalm 55:16). Perhaps the greatest parallel we can see in our current situation is the significance of 1 Peter 3:18-20:

For Christ also suffered once for sins, the righteous for the unrighteous, that he might bring us to God, being put to death in the flesh, but made alive in the spirit, in which he went and proclaimed to the spirits in prison, because they formerly did not obey, when God’s patience waited in the days of Noah, while the ark was being prepared, in which a few, that is, eight persons, were brought safely through water.

From the time man was breathed into existence, Satan attempted to corrupt all of mankind, separating them from their loving Creator, God. Satan did this through deception, leading man astray from God’s truth and into sin. Why? Because sin separates us from God. This separation is so great that the prophet Isaiah tells us that our sins have hidden God’s face from us, so that God cannot even hear us (Isaiah 59:2). Sin had corrupted man in Noah’s time so deeply that the Lord was sorry he had made man (Genesis 6:7). “The Lord saw that the wickedness of man was great in the earth, and that every intention of his heart was only evil continually” (Genesis 6:5). In other words, man had fallen so far from God that his intentions were evil all of the time. Sin had almost completely corrupted the culmination of God’ creation, man. But Genesis 6:8 tells us that “Noah found favor in the eyes of the Lord.”

For 120 years, at the command of God, Noah labored to build the ark. The ark provided a means of escape for Noah and his family who sought to serve God, instead of falling into the binding and destructive chains of sin. This ark-building was Noah’s ministry. Noah warned others of the impending judgement and invited them to be saved by boarding the ark with him. Sadly, Scripture tells us that no one, aside from his family, accepted his invitation to salvation. Only eight people were saved from the flood through the ark (Genesis 7:7).

Discover More About Noah and the Ark

Listen to our podcast on the Biblical account of Noah's Ark.

Following the flood, humanity continued to populate the earth and a nation was formed and set apart to be God’s people (Genesis 12:2). However, because sin was brought into the world through Adam and Eve’s disobedience (Genesis 3), mankind continued its path of sin and separation from God until finally, God made a way for humanity to be permanently saved. God sent His son, Jesus, as the propitiation for the sin of all mankind (1 John 2:2). Webster’s 1828 Dictionary defines propitiation as “the atonement or atoning sacrifice offered to God to assuage his wrath and render him propitious sinners.” Simply put, through Jesus we are restored to right standing with God who is ready to forgive sins and bestow blessings upon us.

Jesus’ ministry, culminating in his death and resurrection, is a parallel to the days of Noah: again, the enemy thought he had won the war for mankind by sentencing Jesus to death on the cross. Instead, Jesus’s death brought eternal victory! Jesus is sitting at the right hand of the Father and is the way of salvation for all who believe. Philippians 2:9-10 says, “Therefore God also has highly exalted Him and given Him the name which is above every name, that at the name of Jesus every knee should bow.”

Just as the captive Israelites covered the doorposts of their homes with the blood of the Passover lamb to be spared from the plagues upon Egypt (Exodus 12:13), Jesus is our Passover lamb because his perfect, sacrificial blood from his death on the cross takes away our sins and restores us to our Father God.

1 Peter 3:18-20 reminds us that God patiently waits for us to accept his invitation to come onboard his ark – Jesus – and that He will bring us safely through the storms of this life if we trust Him as the only way of reconciling to Him through salvation in Jesus Christ. We also know that he is patient because He “does not wish for any to perish, but for all to come to repentance” (2 Peter 3:9). 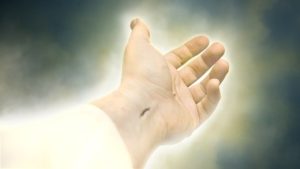 This is the primary message of the Bible. It is called the Gospel. With Easter Sunday rapidly approaching, may we be reminded that God’s love for us is so great that he would send his son for us, so that whoever believes in him would not perish but have eternal life (John 3:16). The door to Jesus’s tomb was rolled away so that Jesus’s power over sin and death would be evident!

Would you like to accept God’s invitation to eternal life through Christ? Quarantine yourself inside God’s ark – Jesus Christ! Romans 10:9 tells us “If you confess with your mouth that Jesus is Lord and believe in your heart that God raised him from the dead, you will be saved.”

If you have never asked Jesus to save you, please pray the following prayer out loud:

“Jesus, I believe you are the Son of God. I believe that you died on the cross for all of my sins and that you rose again. I believe you want to and will restore me to the Father. Please forgive me for all of the ways that I have sinned against you. Today, I choose to turn from my sins. I give myself to you. My life is not my own, it belongs to you. Take your place on the throne of my life, fill me with your love, and help me to become like you. Restore me, live in me, love through me. Thank you for saving me. In Jesus’ name I pray. Amen.”

If you would like to pray with someone to accept Christ or to receive general prayer, please fill out the form below. We will gladly get in touch with you to pray with you quickly as possible.