“…but Squanto stayed with them, and was their interpreter, and became a special instrument sent of God for their good, beyond their expectation.”

These are the words of William Bradford, written of the year 1621 in his journal, Of Plymouth Plantation. What better way to learn of the relations betwixt the Pilgrims and the Natives then through the words of a man who lived through it all? So grateful was Bradford that God had given his congregation Squanto that he wrote of him in depth, calling him a “special instrument sent of God.”

1) That neither he, nor any of his, should injure or harm any of their people.
2) That if any of his did any harm to any of theirs, he should send the offender, that they might punish him.
3) That if anything were taken away from any of theirs, he should cause it to be restored; and they should do like to his.
4) If any made unjust war against him, they would aid him; if any made war against them, he should aid them.
5) He should send to his neighboring confederates, to certify them of this, that they might not wrong them, but might be likewise comprised in thin the conditions of peace.
6) That when their men came to them, they should leave their bow and arrows behind them.

Aside from these terms, Squanto, in staying with the Pilgrims, “showed them how to plant their corn, where to take fish and other commodities, and guided them to unknown places.” In fact, Bradford documents that Squanto “never left them till he died.” 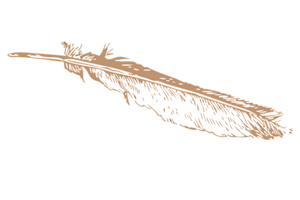 Bradford tells of an instance of Squanto being held captive by a neighboring Sachem, Corbitant, and sending 15 men to rescue him. Upon finding him alive, they rescued him and three others. After dressing their wounds they sent them home. This act, Bradford states, generated “many greetings from various Sachems and much firmer peace.”

In modern-day Plymouth, there stands a statue of Massasoit atop Cole’s Hill. On this statue is inscribed, “Massasoit: Great Sachem of the Wampanoag, Protector and Preserver of the Pilgrims, Erected By The Improved Order of the Red Men As A Grateful Tribute, 1921.” Next to Massasoit’s tribute is a monument that paints a different picture. Erected by the Town of Plymouth on behalf of the United American Indians of New England, the National Day of Mourning tribute depicts assault and genocide on the indigenous people of America. Two monuments, one location, two messages. How do we know what really happened?

Monuments and modern accounts of the Pilgrims depict a very different scenario than the account we see from Bradford’s Of Plymouth Plantation and from Edward Winslow’s Mourt’s Relations. In our studies, it is imperative that we use original sources to form our understanding of historical events. An original source is a first-hand account, typically written by an individual who lived during the time that an event happened. Original, also called primary sources, ensure that truth endures and our understanding of history is accurate. Both William Bradford and Edward Winslow lived through the events that took place at the infant Plymouth settlement. Edward Winslow and William Bradford knew Massasoit personally. They spoke with him, dined with him, fought beside him, forged a treaty with him, protected him and were protected by him. Edward Winslow is even credited with saving Massasoit’s life, venturing out into dangerous winter weather to nurse him when he fell ill. Also, in Bradford’s journal we find recorded that the Pilgrim colony paid the Natives for the land they settled on. All of this information we can find in the journals of the two men who lived these moments. This is the importance of studying original sources.

If one continues reading Of Plymouth Plantation, one finds mention of yet another native who came to live with the Pilgrims. His name was Hobbamok, and Bradford describes him as “a fine, strong man, of some account amongst the Indians for his valor and qualities. He (Hobbamok) remained very faithful to the English till he died.” In gleaning our information from an original source, we find again further proof as to the positive, mutually-beneficial relationship between the Wampanoag and the Pilgrim settlers, and further evidence of Pilgrim fighting on behalf of the Native and Native aiding Pilgrim survival.

At Dayspring Christian Academy, our students are taught to research and reason from original sources. This means that our students are able to bypass the opinion and emotion that convolutes many modern works and discover truth relating to historic events.

Dayspring Christian Academy is unique among private schools in Lancaster County because it teaches students how to think, not what to think. Research using original sources is just one of many ways Dayspring enables students to accurately research and reason through conflicting viewpoints and discover truth.