Principles of the Principle Approach: Part 1 of 3

In early August, Dayspring Christian Academy’s staff and faculty gathered for three days of training and development for the coming year. The in-service was focused primarily on enhancing the understanding of the principles of the Principle Approach. These seven rudiments, or principles, form the foundation of Dayspring’s method of teaching: The Principle Approach. Every class, each subject, and each teacher at Dayspring Christian Academy reflects these pillars. In this blog post, we’ll take a look at the first two pillars and their Scriptural basis. 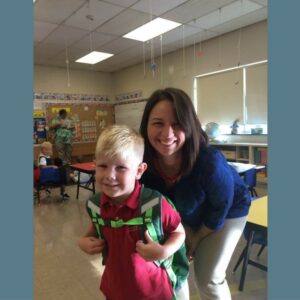 Every individual has value simply because God created them in His image.

Everything in God’s universe is revelational of God’s infinity, God’s diversity, and God’s individuality. God creates distinct individualities, God maintains the identity and individuality of everything which He created.
In other words, every individual has value simply because God created them in his image. Genesis 1:26-27 says, “Then God said, “Let Us make man in Our image, according to Our likeness; and let them rule over the fish of the sea and over the birds of the sky and over the cattle and over all the earth, and over every creeping thing that creeps on the earth. ”God created man in His own image, in the image of God He created him; male and female He created them.” (Read also John 1:3 and 1 Corinthians 12:4-11). The secular view is that the individual has value based on his or her contribution to the whole. The Christian view is that man has value because he was created in the image of God. The Principle of Individuality also shows that God’s individuality can be seen in everything He created. No two organisms are alike, and every organism has distinct qualities.

So how does this principle tie into government? We see this principle reflected in our Declaration of Independence, as first drafted by Thomas Jefferson in 1776. Jefferson eloquently states, “We hold these truths to be self-evident, that all men are created equal; that they are endowed by their Creator with inherent and inalienable rights; that among these, are life, liberty, and the pursuit of happiness; that to secure these rights, governments are instituted among men, deriving their just powers from the consent of the governed; that whenever any form of government becomes destructive of these ends, it is the right of the people to alter or abolish it, and to institute new government, laying its foundation on such principles, and organizing its powers in such form, as to them shall seem most likely to effect their safety and happiness.” Simply put, individuals have inalienable rights that come from God, not government.

One of our staff’s favorite quotes is that by Hugo Grotius, who, during the 1600s, laid the foundation for international law based on natural law. In Rosalie Slater’s Teaching & Learning America’s Christian History, Hugo Grotius is quoted as saying, “He knows not how to rule a kingdom, that cannot manage a Province; nor can he wield a Province, that cannot order a City; nor he order a City, that know not how to regulate a Village; nor he a Village, that cannot guide a Family; nor can that man Govern well a family that knows not how to govern himself; neither can any govern himself unless his reason be Lord, Will and Appetite her Vassals; nor can reason rule unless herself be ruled by God, and (wholly) be obedient unto Him.”

The idea of Christian self-government is that government must first be internal, then external. This form of government is true for the individual and extends to the family, the community, and the nation.

I Timothy 3:5 states “For if a man does not know how to rule his own house, how will he take care of the church of God?” We see this principle again in Galatians 5:22-23—”But the fruit of the Spirit is love, joy, peace, patience, kindness, goodness, faithfulness, gentleness , self-control; against such things, there is no law.” Robert Winthrop said, “Man must be governed by the Bible or the bayonet.” It is important to understand that, when state government increases, less self-government is needed. 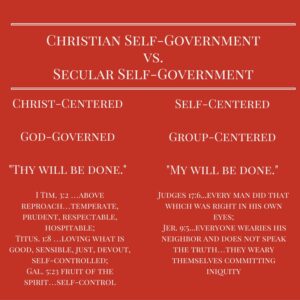 America’s history is rich with examples, models of people who lived out the principle of Christian self-government. We see this concept in the pilgrims, the Virginia plantation, and through the establishment of the 13 original colonies. We also see Christian self-government in Biblical history, modeled through the lives of Samuel, David, Joseph and Moses of the Bible.

Check our next post to learn more about the Principle Approach and the next two pillars: “America’s Heritage of Christian Character” and “Conscience is the Most Sacred of All Property”.

If you’d like to learn more about the Principle Approach, or for more information about Dayspring Christian Academy’s unique approach to Christian education, please contact Karol Hasting at 717-285-2000.