Principles of The Principle Approach: Part 2 of 3

In early August of 2016, Dayspring Christian Academy’s staff and faculty gathered for three days of training and development for the coming year. The in-service was focused primarily on enhancing the understanding of the Principles of the Principle Approach. These seven rudiments, or principles, form the foundation of Dayspring’s method of teaching: The Principle Approach. Every class, each subject, and each teacher at Dayspring Christian Academy reflects these pillars. In this blog post, we’ll take a look at Principle #3 and Principle #4, and their Scriptural basis.

“This divine power of the gospel revealed itself to the heathen in the lives of Christians, which showed forth the virtues of Him who had called them out of darkness into his marvelous light, and enabled them to walk as the children of God, in the midst of a perverse generation, among whom they shone as lights in the world!…The whole life of the Christian, from the beginning to the end, is a conflict with the world and the powers of darkness, a conflict within and without…” Dr. Augustus Neander, Memorials of a Christian life.

Romans 5:3 says, “But we exult in our tribulations, knowing that tribulation brings about perseverance; and perseverance, proven character.” America has a rich heritage of Christian founding which includes the gospel purpose, the founding of Christian Self-Government, and the value of the individual. Our American heritage is rich with stories of perseverance, resilience, accomplishment and more! We understand that character is formed through pressure (2 Corinthians 1:9-10), through conflict (Galatians 4:19), and by consistently taking dominion over our external environment rather than conforming to it (James 1:12). Through each of these tasks, we remain faithful to Christ. 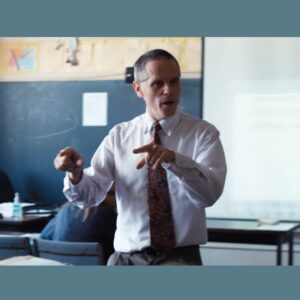 Our teachers and students are challenged to look at their lives and ask, “Have you experienced something trying, and how has it shaped your character?”

We also understand that our individual character determines our home, state, and ecclesiastical government. Throughout American history, we see many historical models of Christian character. Our teachers and students are challenged to look at their lives and ask, “Have you experienced something trying, and how has it shaped your character?”

Christian character is the essential ingredient necessary to maintain and advance a Christian form of civil government. Dr. Elias Boudinot states, “Good government generally begins in the family, and if the moral character of the people once degenerate, their political character must soon follow.” Lydia H. Signourney, a 19th-century poet and author, elaborates, “The strength of a nation, especially a republican nation, is in the intelligent and well-ordered homes of the people. And in proportion as the discipline of families is relaxed, will the happy organization of communities be affected, and national character becomes vagrant, turbulent, or ripe for revolution.”

America’s heritage of Christian Character is our inheritance. Will we embrace and protect our inheritance or sell it? As John Overton Choules so eloquently stated, “Before our children remove their religious connections…..before they leave the old paths of God’s Word…..before they barter their birthright for a mess of pottage…let us place in their hands the chronicle of the glorious days of the suffering Churches, and let them know that they are the sons of the men ‘of whom the world was not worthy’ and ‘whose sufferings for conscience sake’ are here monumentally recorded.” In America today, we see the fruits of this principle. We see that lawmaking is the codification of the lawmaker’s morality.

We see that God uses individual characters to forward His story. We see He uses both the Christian and the pagan for His purposes. An anonymous author once said, “Sow a thought, reap a deed. Sow a deed, reap a habit. Sow a habit, reap a character. Sow a character, reap a destiny.” This brings us to our next key principle, Conscience is the Most Sacred of All Property.

Principle #4. Conscience is the Most Sacred of All Property

Ephesians 2:10 states, “For we are his workmanship, created in Christ Jesus for good works, which God prepared beforehand so that we would walk in them.” Early Americans viewed conscience as a distinct possession and held the view that God Himself gave it to the individual. It was vital not to lose it or violate it. The early American believer was convinced that Christian conscience was valuable property—sacred property!

Webster’s 1828 dictionary defines conscience as “Internal or self-knowledge, or judgment of right and wrong; or the faculty, power or principle within us, which decides on the lawfulness or unlawfulness of our own actions and affections, and instantly approves or condemns them.”

Property is both internal and external as the image below clearly depicts: 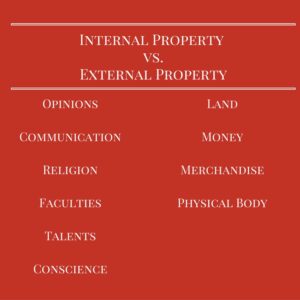 At Dayspring Christian Academy, our students are taught (and our teachers reflect) that Man is God’s property, and the most important property that God has given to every human being is his conscience. As long as we are good stewards of the conscience God has given each of us, we are free and have true liberty, no matter what the external conditions may be. One’s conscience is the most important property to keep undefiled and uncontrolled by anyone except the Lord Jesus Christ.

Conscience is formed by studying the Scriptures. The right of conscience (realized through Christianity) is what gives value to the individual. As did the first century Christians, we surrender our lives before we violate our conscience. With the principle of property is the necessity of stewardship of that property. Stewardship means putting to good use. In America today, we see that we have replaced individual responsibility with psychological justification. We fail to remember that government does not grant men’s rights. God does.

Catch up on the rest of this blog series on The Principle Approach (Part 1 & Part 3).

For more information about the Principle Approach, or to learn more about Dayspring Christian Academy, please contact Karol Hasting at 717-285-2000 or register for a private tour.