What Is The Remember America Speaker Series?

Seven Years Later, We Marvel at What the Lord Has Done

“The journey to this evening was walked on a road that we believe was paved by God. At each step, we waited on the Lord and sought His direction. We prayed and desired with all of our hearts to serve Him. Watching what the Lord has done has been something to behold! We thank God for His loving care, guiding hand, favor, and for bringing all of our guests together with us this evening. May it glorify Him.” 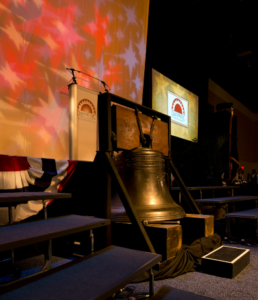 This is the message that is written each year on the Remember America Speaker Series Team page in the event program. Truthfully, the message was written in 2012 to reflect the gratitude and wonder over what the Lord had done in bringing in Glenn Beck for our second Remember America event. To recount that experience would include a harrowing journey with everything from a tornado, an appearance on a national television show, two trips to New York, a kabuki drop, and a stunning twist that still leaves us in awe of God’s provision.

“I will never forget the ringing of the Liberty Bell and the kabuki drop,” said Kevin Zimmerman, chairman of the Remember America Speaker Series Team, of the 2012 event with Beck. “It was an incredible moment where we could see how God had allowed us to put on an event with quality and purposefulness that wasn’t just a standard school banquet.”

(As an interesting aside, the Liberty Bell used at that event was borrowed from the Providence Forum and has since been moved for permanent exhibition at the Museum of the Bible, which was a partner in this year’s event.)

“I can look through each event and name something that I thought was moving and memorable,” Zimmerman continued. “Every event has special moments that you can take away. What I find interesting is that (guests) you talk to seem to have their own moments that are meaningful to them—which is just another indication that God is in it and speaking to everyone as they need.”

“Each event has been inspiring to me, hearing the stories of the speakers and realizing that God has given each one of us a gift and ability to change the world by doing what he calls us to do,” said long-time team member Matt Lapp, who is father of three Dayspring students and owner of JMLapp Plumbing/Heating/Air Conditioning. “I leave the events encouraged that when things are dark, that is when my light will shine the brightest.”

“God has done amazing things for us each year,” said team member Laura Dombach, who has two Dayspring students and is owner of Liberty Tax Services. “He shows us His power in the way He brought the event together. We called on God to do a miracle, work out the details, and equip us to provide a quality evening. He did all those things . . . beyond what we expected. Prayer is an important focus for us.”

Seven years into the annual event, the team can sit back and watch how God has worked and, as the program tribute says . . . it is something to behold.

Let’s take the deliberation over who is chosen as the speaker. 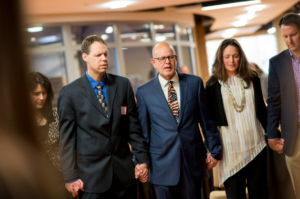 “It’s incredible how we pray and come before the Lord and discuss among ourselves what God is saying to each of us,” Zimmerman said. “He percolates a common thread and this becomes consensus and then it is clear. Often it is not the candidate or direction we thought it was going to go, but at the end of the event we are always amazed how it was the perfect person or people are for that time.”

“I believe it was last year when we were having a debate and discussion about whom we should choose for our speakers,” Lapp remembered.  “A few names came up and the room got quiet and no one had anything more to say. I felt the presence of God in that moment.”

An Army of Volunteers

An event of this size (audiences have ranged from 560 at the first event to 2,450), of course, requires the service of many. The Remember America Speaker Series Team is made up of about 14 people, including Dayspring staff and parents as well as members of the community, who work on the event year-round. This team chooses the speaker and brings along sponsor partners who support the mission of Dayspring Christian Academy. While that team focuses on the financial side of the event, other teams develop the production side of the event and determine everything from event theme to musical selections. Still another team works on building the reception and another on event setup. Altogether, it takes more than 100 volunteers to bring the Remember America Speaker Series to life.

Why do we do this event? 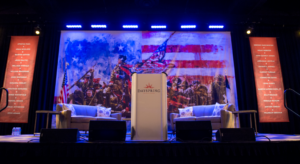 Dayspring Christian Academy is unique among Christian schools. It teaches students using the Principle Approach, which is America’s historic, biblical method of education. It is the type of education that prevailed during America’s first 200 years. This method produced men and women who were able to reason from biblical principles of government to form the world’s first Christian constitutional federal republic—The United States of America. This great experiment was built upon the Christian ideas of God, man, and government, and it afforded the greatest degree of liberty for the individual experienced up to that time. However, our original form of government has been systematically dismantled over the past 100+ years, and the Principle Approach seeks to restore it.

While this happens within our classrooms with our students, most adults were not educated in this way. So, the Remember America Speaker Series takes the classroom into the community. Its mission is to remind Americans of their unique heritage of liberty that was founded upon biblical principles. Since the first Remember America Speaker Series at the school in February 2011 (Rick Green from WallBuilders was our first speaker), more than 13,000 people have attended a Remember America event, including the speaker series, Thanksgiving Exposed, and Constitution courses.

You Should Be There!

“I think the truth that comes out at the Remember America event is what touches the audience the most,” said Zimmerman, who owns Mar-Allen Concrete Products and is the father of two Dayspring students. “Most people come out (of the event) with a clearer understanding that society is being indoctrinated to think that our country was not founded on biblical principles. Our event helps to restore that understanding—that God was deeply at the center of America’s founding.”

“With all the negative news and challenges we are facing as a nation and when it seems like America no longer has a moral compass, coming to this event gives hope,” Lapp noted. “From hearing the students give their speeches to the quality of the event, the great speakers, and the opportunity to network with other believers and business owners.” 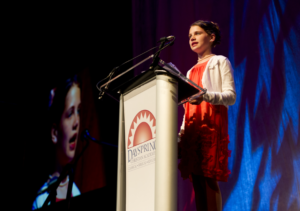 Echoing a message of hope is team member Andrew Marhevka whose daughter attends Dayspring. “One of the most memorable moments of the Remember America events was when a seventh grader stood up and gave a speech,” he recalled. “I had to think back to what I was doing in seventh grade.  It sure wasn’t speaking in front of 1,000 people! She did an amazing job and I was truly impressed.”

Get Your Tickets For Next Year’s Remember America Speaker Series!

What God does with the Remember America Speaker Series is something to behold. This year, God’s leading brought a very special exhibit from the Museum of the Bible that opens in Washington, D. C. in November of this year. The Remember America team was able to secure an exhibit that brought in artifacts from the ancient world (700 to 800 B.C.) Our 2017 speakers were Jay Sekulow, chief counsel for the American Center for Law and Justice, and Lt. Gen. “Jerry” Boykin (Ret.), an original member and later commander of the elite Delta Force and now executive vice president of the Family Research Council.

Next year’s Speaker Series promises to be an exciting evening as well. We will welcome radio host, speaker, and author, Eric Metaxas to Lancaster on April 6, 2018! The event will begin at 6:30 p.m. at the Lancaster County Convention Center.

Tickets and sponsorships for our 2018 Remember America Speaker Series are available now. If you would like more information, please contact Lisa Becker at 717-285-2000 or visit our Remember America page.