What is character development and is it important in today’s world?

Does character develop or are we born with it? Should truthfulness, as a distinct quality of good character, be a primary focus to parents and in the classroom?

In an effort to enlighten our understanding of a child’s character and, specifically, the virtue of truthfulness, let us define and unpack the idea of character development. The questions above lead our thinking and direct us to consider the following ideas and concepts.

Character has several definitions. The first is a symbol on a page, like a letter or a number. Though this definition is not an exact fit for our discussion, it does offer a few thoughts for reflection. Noah Webster (a Founding Father, the father of American education, and author of the original American Dictionary of the English Language) tells us that this type of character is “a mark made by cutting or engraving, as on stone, metal, or other hard material…” First, a character is or has a distinct mark or marking and second, it is cut or engraved in something hard. Using this information let’s start to build a working definition of character development. 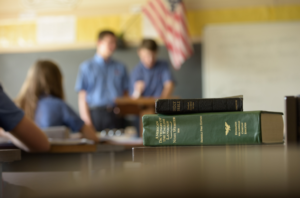 Webster’s next definition for character is “the peculiar qualities, impressed by nature or habit on a person, which distinguish him from others: these constitute real character, and the qualities which he is supposed to possess, constitute his estimated character, or reputation. Hence we say, a character is not formed when the person has not acquired stable and distinctive qualities.” Based on this definition we can infer that character is developed. Practicing virtuous behaviors develops good character. In contrast, a person’s character is not developed if they do not show distinctive qualities such as truthfulness. Parents must train their children in virtuous behaviors and help them to develop Godly character.

Human beings are born with a unique personality, and each child is uniquely created by God for a specific purpose. We read in Psalm 139:13-14, “For you created my inmost being; you knit me together in my mother’s womb. I praise you because I am fearfully and wonderfully made; your works are wonderful, I know that full well.” Human beings were also born with a sin nature. Romans 5:12 says, “Therefore, just as sin came into the world through one man, and death came through sin, and so death spread to all because all have sinned.” Based on God’s word and the definitions examined, we can conclude that people are born with a distinct personality AND character must be formed or impressed on a child to combat our sin nature.

I often say, “we don’t have to teach children to misbehave, they figure that out on their own”. On the contrary, we must teach children the virtues that produce good character and demonstrate how to behave in social settings. A good place to start training up a child is the virtue of truth. Let us look at what Jesus said about truth in John chapter 14: “I am the way, and the truth, and the life; no one comes to the Father but through Me.” The complexity of this statement can be overwhelming. Jesus is both the path to the Father and the fulfillment of all Truth. Webster says in his definition of truth, “the truth of God is his veracity and faithfulness” Webster defines veracity as the habitual observance of truth.

Jesus, while on earth, was the perfect example of God’s true nature and the manifestation of truth. We can stand firmly on the importance of teaching our children to be truthful since our natural inclination is to lie or exaggerate the truth. It all began in the Garden of Eden when the serpent deceived Eve by mixing truth and lies. 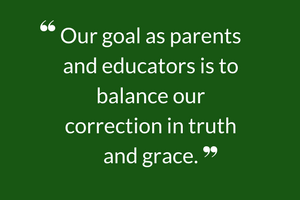 As Christ followers, we must train our children in the spiritual discipline of truthfulness. We can do this simply by addressing issues of untruthfulness one at a time. Our goal as parents and educators is to balance our correction in truth and grace. When our children exaggerate the truth we must gently and quickly point out the lie and the truth. We must never let the “little white lie” go uncorrected. The goal is to walk alongside our children and train them to discern deception from the truth, focusing them on truth.

Teaching our children truth resonates with the Word of God and NEVER contradicts it. We must teach them that God’s word is the standard. Truth is absolute, and not up for opinion. Teaching children the virtue of truthfulness is a deliberate effort. We must be truthful in all that we do and say and be watchful about allowing lies to creep into our children’s world and vocabulary.

A wise person once told me, “Parenting is the most difficult job on the planet.” I tend to agree, knowing being intentional with our training is hard work. But, parenting carries rewards that are wonderful and eternal.

Joshua 1:9 empowers us with these words: “Have I not commanded you? Be strong and courageous! Do not tremble or be dismayed, for the Lord your God is with you wherever you go.” This has a strong application to the battle for character development and truthfulness that lies before us as parents. Be strong in the Lord and courageous in Spirit and do not give up on truth!