The Richness and Relevance of Shakespeare

At the end of each school year, Dayspring students discover the richness, depth, relevance and excitement of Shakespeare. This final week of school is a whirlwind of activity as students read and act out a Shakespeare play and choose an elective to bring to life an aspect of the play. The last day of school showcases the work of our students and their mastery of the material, as every class, along with parents and special guests, visit the presentations staged throughout the school.

Behind the scenes of this exciting week, is Upper School Teacher Mr. Schwartz. We interviewed him to get an in-depth look at why Dayspring Christian Academy dedicates an entire week of the school year to the Bard.

Q: Why does Dayspring teach Shakespeare to all grades, every year, instead of tucking it inside a broad high school course?

A: There are 4 key reasons why we teach Shakespeare across the grades, every year. 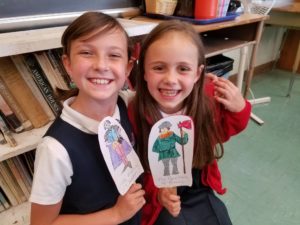 First, Shakespeare is English. In the few centuries that our language has existed, what have been its two stalwart standard bearers? What masters of expression have tutored every English writer since? Shakespeare and the King James Bible! Shakespeare’s craft is not merely correct, it is creative. He presents the reader an exploding dictionary of vocabulary, a syntacticopia of sentence structures, he teaches the student the priceless art of coining new words and the writer-architect’s skill to style sentences according to design principles whose applications and combinations are infinite.

Secondly, Shakespeare is drama. This most translated of playwrights (indeed, most translated of extra-Biblical authors) sets his stage across the globe. Because his sympathetic development of character—noble, ignoble, holy, and profane—quickens his players into people; and because his plotting, both bold and subtle, kindles foresight and perception, and fires the imagination; and because his themes stride among eternal principles: Shakespeare speaks in a universal voice to which every souled man, hearing, must listen.

Additionally, Shakespeare is forum. By the end of high school, not all students have read Homer or Cicero or Dante or Donne, not all have enjoyed Hawthorne and Twain and Steinbeck, not all have tried Kafka, Sartre, not all have seen Miller, but hardly an English-speaking 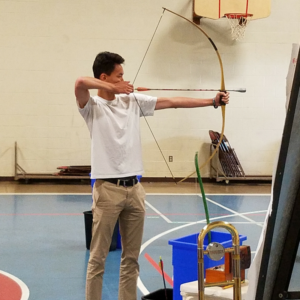 student has failed to read and to see Shakespeare. Shakespeare is common ground—the agora where all men meet to discuss ideas.

What a happy circumstance that Christians should meet unbelievers to discuss Biblical literature—when not the Bible itself, which so many foolishly reject, yet literature with a Biblical worldview, which so many of those same unbelievers somewhat unwittingly embrace. Shakespeare’s universe he received from the LORD through His Holy Word: in it, God exists and—from Him—all else; good and evil and the duty of man are defined by Him Who changes not; and history, though marred by the pernicious evils of the fallen ones, finally dances to the tune of providence.

Indeed, Shakespeare himself lived at a key juncture in the history of Christianity, when Reformation spirit was taking England, and Pilgrim character was about to take the New World.

Finally, for the reader who cares not for English and drama and forum, if he can yet care (or come to care!) about the triumph of good over evil, the tempering of justice with mercy, the trials of character that bring forth eternal gold, Shakespeare is a primer for the development of good morals.

Q: What are the vision, goals, and objectives for learning Shakespeare at Dayspring?

A: Our vision for teaching Shakespeare is for the spiritual edification of our students through literature that bears a Christian mark. 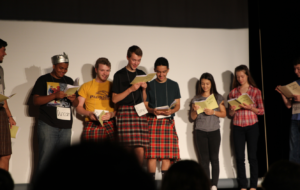 We have 5 goals, or outcomes that we can expect to see in our students through teaching Shakespeare according to the Principle Approach. They are:

In order to achieve these goals, we have objectives in place to ensure we are teaching effectively. These objectives are:

Q: What is one key aspect of Shakespeare that is taught at Dayspring?

A: At Dayspring, we show our students the beauty of the Pentactic. What is the Pentactic, or better stated…what does Shakespeare accomplish in the five acts of his plays? I’m glad you asked…. In fact, here is an example of Pentactic in five of Shakespeare’s best known plays.

Q: What are some examples of electives that students can choose from for their Shakespeare week projects?

A: Bringing Shakespeare to life is one of the many unique opportunities for in-depth learning and mastery at Dayspring. For example, this year’s study is Twelfth Night. Possibilities of electives for our grade levels include:

Five Electives Pertaining to Medieval and Early Reformation & Renaissance Times, the Era of the Play

Four Electives Pertaining to Illyria and the Mediterranean, the Setting of the Play

Four Electives Pertaining to Motifs of the Play

Two Electives Pertaining to Scenes from the Play

Shakespeare week is truly a collaboration of planning, ideas, and thoughtful execution. We are looking forward to seeing the fruits of this year’s study!