Commit Your Ways: An Interview with the Benham Brothers and Jason Dellinger

This interview first appeared in the October 2016, Volume 2, Issue 1 edition of the Middle School Messenger, a student-led e-publication of Dayspring Christian Academy. This interview has been edited for brevity and clarity. The meaning of the subjects’ statements has not been changed by these edits.


This year’s Annual Upper School Retreat featured the Benham brothers and their friend, Jason Dellinger. The trio spoke on pursuing purity, this year’s school theme, and spoke on how to achieve purity in faith using the 3Cs: conviction, commitment, and courage. Wanting to know a little more, the Middle School Messenger had the opportunity to talk to the Benhams.

Middle School Messenger: What was it like in the moment you decided to stand up for Christ?

Benham Brothers: Well, the first thing we thought, we were actually afraid, because we didn’t want to lose the show. I didn’t want to lose the platform that God had given us for ministry. I didn’t want to lose, obviously, the income that it had already started to bring in and the future income. I didn’t want to lose our reputation. I felt like we had spent years in the marketplace developing a good reputation of being good business leaders, and now, all of a sudden, we were being run through the mud because of our Biblical convictions. All that being said, Matthew 5:11 came to our mind, where Jesus said, in his own words, “Blessed are you when men persecute you, and falsely say all kinds of evil against you. Rejoice and be glad, because they treated your fathers the prophets the same way.” So, it was something that initially we were afraid of, but within, probably within a few hours, we actually were rejoicing that, “Wow, Lord, you’ve allowed us to go through something like this? What an honor. What a privilege.” 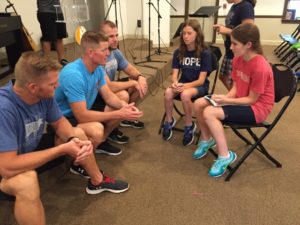 The Benham Brothers and Jason Dellinger participate in an interview with Dayspring’s Middle School Messenger reporters.

MSM: What makes your faith so important to you?

MSM: You talked about making commitments. How are some ways Middle School kids can do this?

Jason Dellinger: Well, there’s a lot of ways, but to keep it simple, and actually, you’re getting a little lead into tonight’s thing, but here you go. One thing I teach kids is to have three talks, every single day. Number one is to talk to God. Now, what do you call that? Prayer. Number two is let God talk to you. Now, there are lots of ways God can talk to you, but the ultimate way God talks to us is through the Bible. So, pray, read the Bible, and then number three, the third talk you have every single day, is talk to others, which is called witnessing. Just be an example. Standing. Courage. So those are the three talks. That’s something even adults can use. But you talk to God, let God talk to you, and witness. Talk to others.

MSM: So, you were also talking about how Christians shine their lights. How can you do that even in a Christian setting?

BB: You know, in a Christian setting is actually more difficult. This room has light all in it, right? If I got a flashlight, and I turned it on, it’s not really going to affect the room much. And if everybody turned it on, it’s not going to affect anything very much because there’s already light in here. But, you go into a dark place and turn on, everybody can see it. The question is not what type of impact we’re having. The question is, are we turned on? Is our light on? God will determine whether He puts us in a dark room or whether He puts us in a light room. So, the way to do that is to simply be who you are, once you know your identity, and just be who you are, no matter who you’re around. Whether Christian or un-Christian, it doesn’t matter. You’re the same person, and you’ll shine the same, no matter where you are.

MSM: What advice do you have for middle schoolers?

MSM: What are your favorite Bible verses? 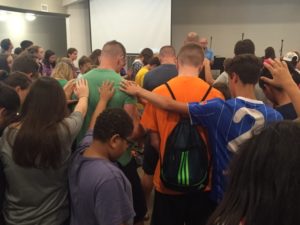 Students send the Benham Brothers and Jason Dellinger off to their next speaking engagement with prayer.

BB: Mine is Mark 14.15-“So then they all deserted him and fled.” It’s just a good reminder that I’m no better in possibility that the worst criminal is in actuality.

BB: Mine’s the entire passage of Ephesians chapter six. I write it on every book that I sign. I do Ephesians 6 and [verse] 10 would be the most important one. “And finally be strong in the Lord and in His mighty power.”

JD: I would say Proverbs. Proverbs 16.9 is a good one, but I love the entire book of Proverbs. “But commit your ways to the Lord and your thoughts will be established.”

MSM: Is there anything else you’d like to say?

BB: We need good journalists. We need folks like you to really go out there and really hone in your talent so that you can get out there. Because what happens is when Christians abandon the world of journalism or abandon the world of media, then it’s just going to get filled with secular people that don’t really think God’s thoughts.

JD: All they hear is lies.

BB: And then they just are constantly pumping out evolutionary thoughts or revisionist history, or lies about the Scripture. But it takes folks like you to get out there and fight that fight.