Is the Constitution outdated? The Founding Fathers knew you would ask.

In this day and age of social media, blogs, 24-hour news, etc., one does not have to look very far to hear politicians, political pundits, casual political hobbyists, or any John Doe with a Twitter handle call for a major overhaul of the US Constitution. Depending on what is one’s main source of news or op-eds, he may find just as much of a call for a new constitution coming from the political left as from the conservative right. Democrats, Republicans, Tea Partiers, Libertarians, the Freedom Caucus…all have expressed some level of desire for Constitutional amendments or even an outright overhaul. Here are some of the most popular arguments given: 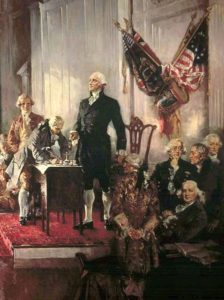 It is a short article, but arguably one of the most important, both for how it has been implemented historically and the potential it still has. While Articles I-III provide us with the basic framework for the three branches of government, Article V is perhaps the most forward thinking article of them all. Knowing that this document might one day need to be amended or changed, Article V was placed in the Constitution by our Founders. Its 143 words are as follows:

“The Congress, whenever two-thirds of both houses shall deem it necessary, shall propose amendments to this Constitution, or, on the application of the legislatures of two thirds of the several states, shall call a convention for proposing amendments, which, in either case, shall be valid to all intents and purposes, as part of this Constitution, when ratified by the legislatures of three fourths of the several states, or by conventions in three fourths thereof, as the one or the other mode of ratification may be proposed by the Congress; provided that no amendment which may be made prior to the year one thousand eight hundred and eight shall in any manner affect the first and fourth clauses in the ninth section of the first article; and that no state, without its consent, shall be deprived of its equal suffrage in the Senate.”

Side note: In classic Founding Father form, one of their greatest contributions to us comes with a fatal flaw. This article, which provides future generations of Americans the opportunity to amend the document, also codifies the slave trade for the first 20 years of its existence (The reference to the “first…clause(s) in the ninth section of the first article…”). But, what is now accepted as a contradiction of Constitutional ideals (protection of the slave trade) should also be seen for what it truly is: a pragmatic compromise, made by flawed men who were willing to tolerate slavery and the slave trade, but fought to ensure that it would eventually die out. Their hope was that after twenty years, the southerners who had grown dependent upon slave labor would adjust their livelihood and that the ideal of full equality under the law for all would become the reality. Further evidence of this is seen in the Northwest Ordinance of 1787 in which slavery was prohibited in the Northwest Territory—an attempt to stop the spread of slavery in the new land the United States would surely acquire). As ever, the Framers’ intent was to either make right a current wrong or provide the opportunity for future Americans to make it right.

So, there you have it! There are two ways to propose a change to our Constitution. The way that all 27 of the Constitution’s amendments have been ratified still stands. Two-thirds of Congress (which would be 291 Congressmen and 67 Senators) may propose an amendment; and then when three-fourths of the states (38) have ratified, it carries full Constitutional authority.

The second way, and one which is gaining momentum, is for two-thirds of the states (34) to call for a convention for proposing amendments. This has never happened, but the number of states who have passed resolutions calling for a convention in the past three years is increasing. There is debate as to how to even count official applications by states for an Article V Convention, thus the current number is debatable. If an Article V Convention were to take place, however, whatever this convention produced would still require the ratification of 38 states for it to carry the weight of Constitutional law.

Article V of the US Constitution provides Americans celebrating the 230th Anniversary of the signing of the Constitution with the very solution desired by those who believe there are Constitutional issues to address—the amendment process. In any of the current political situations in which Americans find themselves in need of legal remedy, the amendment process is and should be the route taken. To expect that in the current political climate, a new Constitution could be ratified and agreed upon which would be an improvement on the current document is folly. No, for the flaws inherent in the Constitution (Ex.: No term limits for Congressmen) and for the clarity needed for things the Founders never envisioned (Ex.: Sanctity of life), Article V gives the nation what is needed.

Do you wish to see term limits for Congressmen and Senators? A Constitutional Amendment will take care of that. Are you in favor of an abolition of the progressive income tax and the imposition of a flat tax? That can actually be taken care of by Congressional enactment, but an amendment would make it surer. Do you wish to see our government define marriage according to biblical standard? Article V provides the path.

A final thought. One may read Article V and note the difficulty of passing an amendment. It is an enormously difficult task. It has only happened 27 times in 230 years, and most of those happened in sections (The first ten all at once—The Bill of Rights, The Reconstruction Amendments—13-15, and The Progressive Amendments—16-21). But, the cumbersome nature of enacting amendments was intentional foresight by the forefathers. If the Constitution was to be changed easily, even a small imagination can envision not only how long of a document it would currently be, but how many 18th and 21st Amendment situations we would have as part of our history. 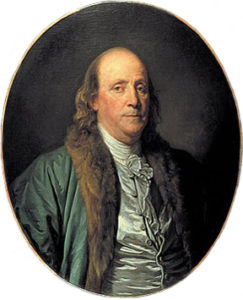 Perhaps the best way to remember the Constitution on its birthday is with Benjamin Franklin’s final speech at the convention in September of 1787. I leave it here for your reflection. On this Constitution Day, let us all doubt a little of our own infallibility, thank God for our Constitutional Republic, and continue to fight for her preservation.

“Mr. President, I confess, that I do not entirely approve of this Constitution at present; but, Sir, I am not sure I shall never approve it; for, having lived long, I have experienced many instances of being obliged, by better information or fuller consideration to change my opinions even on important subjects, which I once thought right, but found to be otherwise….

“In these sentiments, Sir, I agree to this Constitution, with all its faults—if they are such; because I think a general Government necessary for us, and there is no form of government but what may be a blessing to the people, if well administered; and I believe, farther, that this is likely to be well administered for a course of years, and can only end in despotism, as other forms have done before it, when the people shall become so corrupted as to need despotic government, being incapable of any other. I doubt, too, whether any other Convention we can obtain, may be able to make a better Constitution; for, when you assemble a number of men, to have the advantage of their joint wisdom, you inevitably assemble with those men all their prejudices, their passions, their errors of opinion, their local interests, and their selfish views. From such an assembly can a perfect production be expected?

“It therefore astonishes me, Sir, to find this system approaching so near to perfection as it does; and I think it will astonish our enemies, who are waiting with confidence to hear, that our councils are confounded like those of the builders of Babel, and that our States are on the point of separation, only to meet hereafter for the purpose of cutting one another’s throats. Thus I consent, Sir, to this Constitution, because I expect no better, and because I am not sure that it is not the best. The opinions I have had of its errors I sacrifice to the public good. I have never whispered a syllable of them abroad. Within these walls they were born, and here they shall die….

“On the whole, Sir, I cannot help expressing a wish, that every member of the Convention who may still have objections to it, would with me on this occasion doubt a little of his own infallibility, and, to make manifest our unanimity, put his name to this Instrument.”

To learn more about America’s form of Government, please listen as Dayspring Christian Academy teacher, Dan Stone, teaches on America’s Founding Documents including the Declaration of Independence, the Articles of Confederation, and the Constitution. Listen to the podcast now!