3 Keys to Set and Achieve Goals and Keep Resolutions

Do you make New Year’s Resolutions? Is January your annual goal-setting time? You are not alone! A study by Finder.com found that 141.1 million adult Americans — or 55.31% of all American adults made resolutions for 2021. Additionally, Finder.com reports that approximately 74.02% of the adult population say they want to learn something new, make a lifestyle change or set a personal goal in 2021. That’s astounding! But, how many of these goals and resolutions actually stick?

According to Inc.com, approximately 80% of people who make New Year’s resolutions will have dropped them by the second week of February. What can we do to make our goals and resolutions stick? After all, most of us would likely agree that growth is an important part of the Christian walk. As is the Dayspring way, we turned to primary sources to discover how two of our Founding Fathers handled what modern American culture typically calls goal setting.

Let’s start with Benjamin Franklin. If Benjamin Franklin were alive today, we’re pretty sure he’d love STEM education. A lifelong inventor known for his knack of bettering humanity by way of things like electricity, bifocals, the Franklin stove, swim fins (yes, really!), and lightning rods, Benjamin Franklin’s autobiography tells us in detail how he sought to better himself. Ben said:

“I propos’d to myself, for the sake of clearness, to use rather more names, with fewer ideas annex’d to each, than a few names with more ideas; and I included under thirteen names of virtues all that at that time occurr’d to me as necessary or desirable, and annexed to each a short precept, which fully express’d the extent I gave to its meaning.”

Simply put, Benjamin Franklin made a chart of the virtues he thought worth emulating and daily marked whether he mirrored that virtue.

What are the virtues Franklin thought necessary or desirable? We’ve listed them below, along with their definitions from Webster’s 1828 dictionary. Using Webster’s 1828 dictionary helps us to understand the way Benjamin Franklin would have defined these virtues. Included with Webster’s definitions are corresponding Scripture references that build our understanding of God’s view of these virtues.

Temperance: Eat not to dullness. Drink not to elevation.

Webster’s Definition: Moderation; particularly, habitual moderation in regard to the indulgence of the natural appetites and passions; restrained or moderate indulgence;

Silence: Speak not but what may benefit others or yourself. Avoid trifling conversation.

Webster’s Definition: To oblige to hold the peace; to restrain from noise or speaking.

Order: Let all your things have their places. Let each part of your business have its time.

Resolution: Resolve to perform what you ought. Perform without fail what you resolve.

Frugality: Make no expense but to do good to others or yourself: i.e., Waste nothing.

Webster’s Definition: Prudent economy; good husbandry or housewifery; a sparing use or appropriation of money or commodities; a judicious use of any thing to be expended or employed; that careful management of money or goods which expends nothing unnecessarily, and applies what is used to a profitable purpose; that use in which nothing is wasted.

Industry: Lose no time. Be always employed in something useful. Cut off all unnecessary actions.

Webster’s Definition: Habitual diligence in any employment, either bodily or mental; steady attention to business; assiduity; opposed to sloth and idleness.

Sincerity: Use no hurtful deceit. Think innocently and justly; and if you speak, speak accordingly.

Webster’s Definition: Honesty of mind or intention; freedom from simulation or hypocrisy.

Justice: Wrong none by doing injuries, or omitting the benefits that are your duty.

Webster’s Definition: The virtue which consists in giving to every one what is his due; practical conformity to the laws and to principles of rectitude in the dealings of men with each other; honesty; integrity in commerce or mutual intercourse.

Moderation: Avoid extremes. Forbear resenting injuries so much as you think they deserve.

Webster’s Definition: The state of being moderate, or of keeping a due mean between extremes or excess of violence.

Cleanliness: Tolerate no uncleanness in body, clothes, or habitation.

1. Freedom from dirt, filth, or any foul, extraneous matter.

2. Neatness of person or dress; purity.

Tranquility: Be not disturbed at trifles, or at accidents common or unavoidable.

Chastity: Rarely use venery but for health or offspring; never to dullness, weakness, or the injury of your own or another’s peace or reputation.

Webster’s Definition: In ethics, freedom from pride and arrogance; humbleness of mind; a modest estimate of one’s own worth. In theology, humility consists in lowliness of mind; a deep sense of one’s own unworthiness in the sight of God, self-abasement, penitence for sin, and submission to the divine will.

A Look at George Washington’s Character

George Washington is known to have been influenced by the 110 Rules of Civility, copied in his schoolbook. These rules are similar to the virtues that Benjamin Franklin sought to emulate. These Rules of Civility are believed to have originated in France in the late 16th century. During Washington’s lifetime, these concepts were extremely popular, achieving a status similar to what we refer to today as “going viral.”

These Rules of Civility are still referenced in our culture with bloggers and business owners large and small, referencing them as, “surprisingly relevant.”

Here are a few of our favorites:

Rule No. 1 – Every Action done in Company, ought to be with Some Sign of Respect, to those that are Present.

Rule No. 22 – Shew not yourself glad at the Misfortune of another though he were your enemy.

Rule No. 45 – Being to advise or reprehend any one, consider whether it ought to be in publick or in Private; presently, or at Some other time in what terms to do it & in reproving Shew no Sign of Cholar but do it with all Sweetness and Mildness.

Rule No. 49 – Use no Reproachfull Language against any one neither Curse nor Revile.

Rule No. 52– In your Apparel be Modest and endeavour to accomodate Nature, rather than to procure Admiration keep to the Fashio[n] of your equals Such as are Civil and orderly with respect to Times and Places.

Rule No. 56 – Associate yourself with Men of good Quality if you Esteem your own Reputation; for ’tis better to be alone than in bad Company.

Rule No. 58 – Let your Conversation be without Malice or Envy, for ’tis a Sig[n o]f a Tractable and Commendable Nature: And in all Causes of Passion [ad]mit Reason to Govern.

Rule No. 80 – Be not Tedious in Discourse or in reading unless you find the Company pleased therewith.

Rule No. 82 – Undertake not what you cannot Perform but be Carefull to keep your Promise.

Rule No. 89 – Speak not Evil of the absent for it is unjust.

Rule No. 107 – If others talk at Table be attentive but talk not with Meat in your Mouth.

Rule No. 108 – When you Speak of God or his Atributes, let it be Seriously & [with] Reverence. Honour & Obey your Natural Parents altho they be Poor.

Rule No. 109 – Let your Recreations be Manfull not Sinfull.

Why did Washington and Franklin Succeed at Improving Themselves?

Historical writings and documents tell us that these men were loved and revered in their time. This begs the question, how did these two men achieve their goals? We have three observations we can make based on primary sources available to us.

First, both men penned their intentions. Franklin actively marked his progress. As previously mentioned, Benjamin Franklin created a chart for keeping track of his virtues. You can find it in his autobiography. 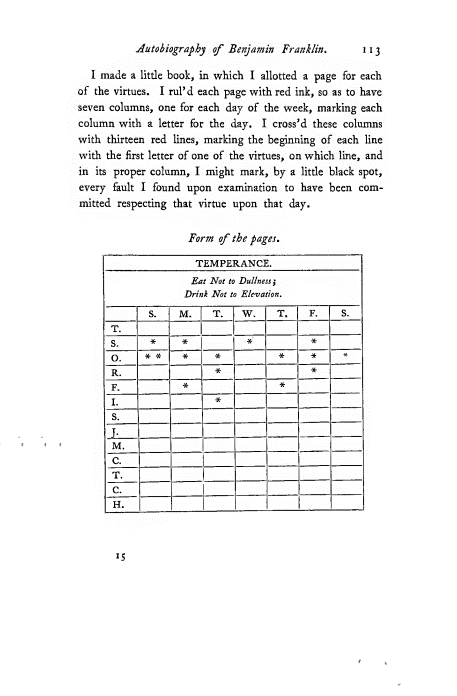 Journaling/goal tracking is crucial to the success in achieving any goal. Being specific and detailed in your goal setting is also imperative.

Secondly, both Founders placed God’s Word at the center of their learning and shared their goal of being men of character and virtue with others. Both believed in the positive influence of the Bible on American culture. Franklin wrote, “A Bible and a newspaper in every house, a good school in every district, all studied and appreciated as they merit, are the principal supports of virtue, morality, and civil liberty.” Washington “liberally seasoned his discourse with biblical phrases and allusions” and was convinced that the Bible had had “ameliorating influence on mankind and increased the blessings of society.”

Third, we can see that these Founders placed character at the center of their desire to lead a blessed life. In Colossians 3:1-17, we are told to put to death (put off) what is earthly in us. These are poor character traits and actions such as sexual immorality, covetousness, anger, slander, lying, and others. We are told to put on compassion, kindness, humility, patience, forgiveness, love, unity, thankfulness and other Godly character traits.

If anything can be learned from these two influential men in the area of goal setting and New Year’s Resolutions, it is that we would benefit greatly from daily reading God’s Word [the Bible], we ought to set our goals around developing Godly character traits, and to journal our goals and daily log our progress in achieving those goals.