In his short story for children, The Emperor’s New Clothes, Hans Christian Anderson depicts a vain emperor duped by two charlatans posing as tailors. The two knaves explain to the emperor that they are renowned tailors with a unique ability to create clothing that only those “fit for their station in life” or “wise” could see. The emperor sees an opportunity to test the men in his court in addition to enhancing his considerably large wardrobe. He pays the tailors a large sum of money and gives them expensive thread and patterns, and the imposters pocket it all. The king sends various administrators to check on the tailors. Each comes back with a raving report of the beauty of what was seen by them on the loom. However, there was nothing to be seen, but no one wanted to accept that they may be “unfit for their station” or “foolish,” so they “spun their own yarn,” so to speak. Eventually, the emperor gets to view the loom for himself and is shocked to find that he cannot see anything. He also raves about what he cannot see. In the end, the emperor marches out to the public, who also has heard about the unique properties of the emperor’s new clothing. Not even a crowd of people is willing to state the obvious in front of their own eyes. It is not until a child speaks the truth that everyone realizes the absurdity of the emperor, who must finish his procession bare. 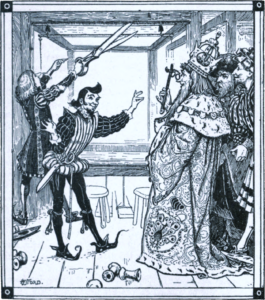 Truth is a precious gift from God given to every believer. Biblical truth does not change but remains, like our God, steadfast and sure. However, at times the truth can be challenging to speak because it can create conflict in those who do not hold to the same absolutes. Yet it is the believer’s duty to relay the truth, for truth brings freedom (John 8:35, English Standard Version).  Knowledge of biblical truth destroys “strongholds,” destroys “arguments,” and “lofty opinions” that are “raised against the knowledge of God” and help to “take every thought captive to Christ” (2 Corinthians 10:4-5).

Anderson, in his story “The Emperor’s New Clothes,” shows how vanity can get in the way of truth, not just vanity but public opinion as well. No one was willing to speak up regarding what they saw. They did not want to be labeled a fool, so their king strolls down the street in his “birthday suit,” and two incredibly sly conmen get away with a large sum of money. As believers, it is not difficult to see the foolish thinking that abounds in the latest buzzwords of the day.  Whether it is gender fluidity, cancel culture, abortion rights, or the economy, the Bible has much to say, and the Christian’s job is to know the issues and speak that truth to those around them. The emperor and his subjects denied the truth and became what they most wanted to avoid, “fools.” Paul says in Romans 1:22, “Claiming to be wise they became fools.” Believers must be like the child who pointed his finger and stated the truth, “The emperor is naked,” and hope that the Holy Spirit moves in those around them to recognize the truth for themselves. As Pastor Lindsey Lautsburgh recently shared in a sermon at Reality Church, “It is the believer’s job to speak the truth; it is God’s job to reveal it.”

If you are looking for a Christian school in Lancaster, PA, please schedule a private tour or register to attend one of our Open Houses. If you would like more information about Dayspring Christian Academy or the Principle Approach, please call Karol Hasting at 717-285-2000.